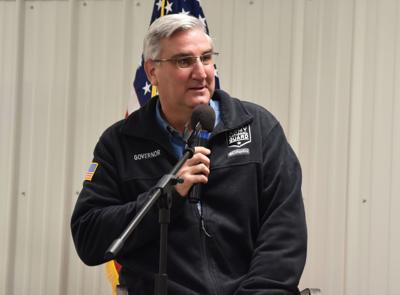 PRINCETON — Gov. Eric Holcomb’s decision to attend this year’s Lincoln Day Dinner came with a safety checklist, as COVID-19 precautions have changed even the most traditional of campaign opportunities.

Holcomb is seeking another four years as governor, with voters heading to the polls with the choice of Holcomb, Democratic candidate Woody Myers and Libertarian Donald Rainwater.

“I rewind the tape in my mind about four years ago, and when the then governor was tapped by the now president to be his running mate, and that left us 106 days,” Holcomb said. “That campaign felt like a whirlwind all within itself. I never would have looked back on that as that would be our normal campaign.”

But then COVID-19 hit, and Holcomb said they had to rethink everything. He canceled out-of-state campaign travel, and said he’s only left the Indiana twice since that decision, both for official duties that required travel to the White House.

Now less than 20 days from the election, Holcomb said he’s fortunate to have a broad base coalition of supporters statewide, as well as an abundance of financial resources.

“I think that’s just reflective of what we’ve been able to do over the last 31/2 years, heading into the fourth quarter of this year,” he said.

Holcomb said he wants to lead by example and show the community they can still go to work, still worship in church, as long as safety measures are in place.

“You can still do a lot of things in life,” he said. “It’s just going to be different.”

Saturday evening Holcomb was slated as the keynote speaker for the Lincoln Day Dinner, but he said his team is upfront about safety measures needed.

“It’s not going to be like past Lincoln Day Dinners,” he said, “where I can just mill around, and not just rub shoulders, but give hugs and catch up with people at a very close distance in a sea of humanity.”

The stop in Princeton brought Holcomb to an area of the state he said has “surged” as of late when its comes to COVID-19 cases. The Indiana Department of Health has Gibson, Pike, Vanderburgh, Posey and Warrick counties all designated orange through its color rating system based primarily on the seven-day positivity rate and weekly cases per 100,000 residents.

Holcomb acknowledged the cases in the southwest portion of the state, while also bringing in neighboring states Illinois and Kentucky.

“If you really just draw a circle around it, it’s a Tri-State area that’s surged as of late,” he said.

Holcomb said it takes all three areas, nonprofits, private, government, preaching the the same message when it comes to safety precautions.

“We’re all in this together. That’s not just rhetorical. That’s what it requires to get through it,” he said. “I’m just appreciative of so many Hoosier out there who are doing their part and a whole lot more in terms of sacrifice and generosity.”

For local leaders, Holcomb said he encourages them to educate their communities as much as possible.

“It’s where the rubber meets the road, it’s where the actions are seen by the most neighbors and citizens of a community,” he said. “We want to make sure we’re getting all the right global data to locals to make decisions.”

Currently, no local ordinances are in place that restrict gathering sizes in the county or mandate masks on a local level. Gibson County has been following state guidance, and with Indiana now in Stage 5 of Holcomb’s reopening plan, this mean no capacity restrictions in restaurants and bars and no limit to the size of social gatherings.

The mask mandate does remain in effect and people are encouraged to use the six-feet social distancing precaution.

“It’s not all on the government,” Holcomb said. “This is on all of us, a lot of personal responsibility.”