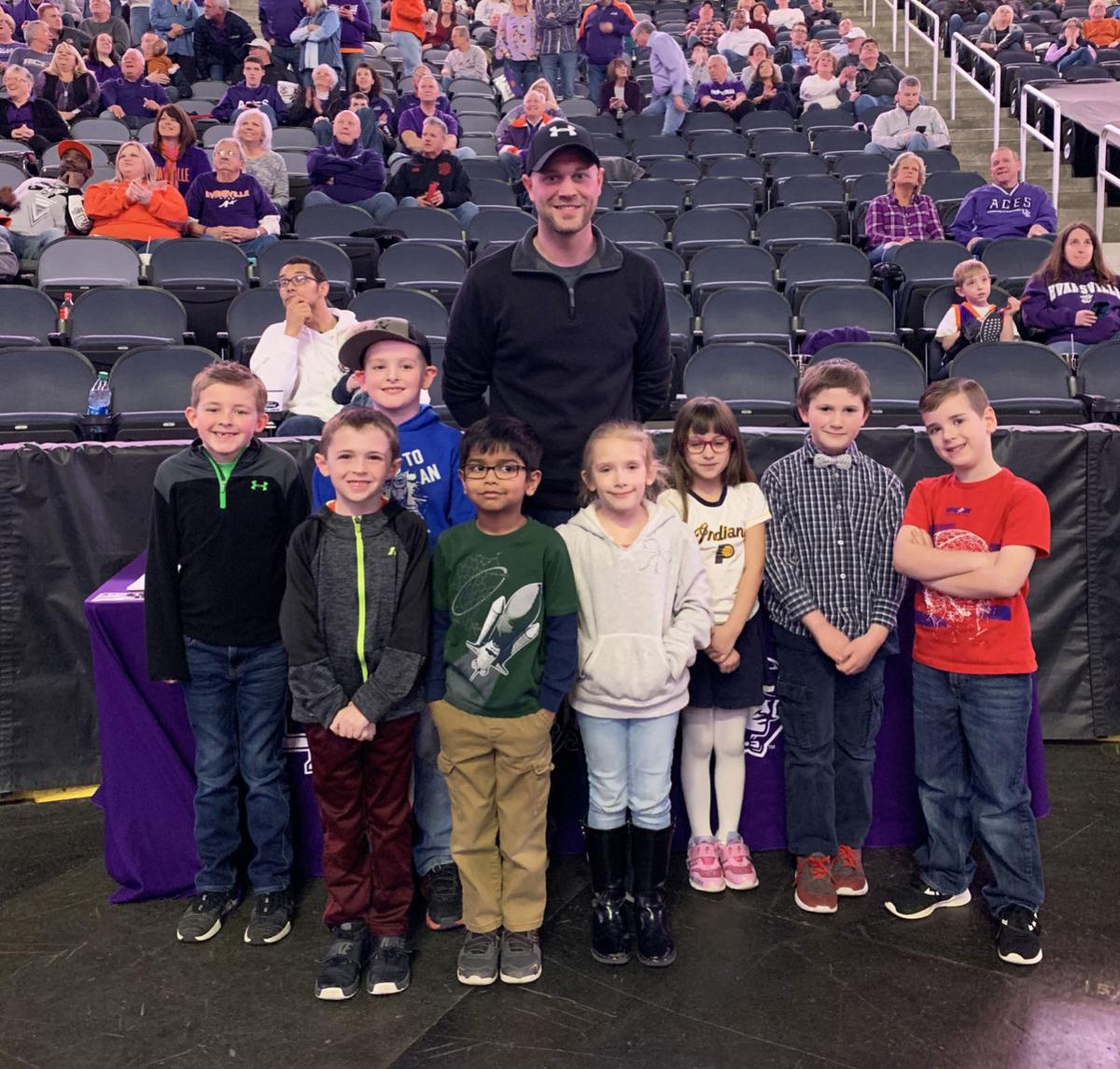 Ryan Sparrow, Francisco Elementary first grade teacher, was joined by about half his class at the University of Evansville Aces game Sunday afternoon in Evansville. Sparrow was recognized as one of the ACE Educators of Year. The Aces provided tickets for his students and their families. 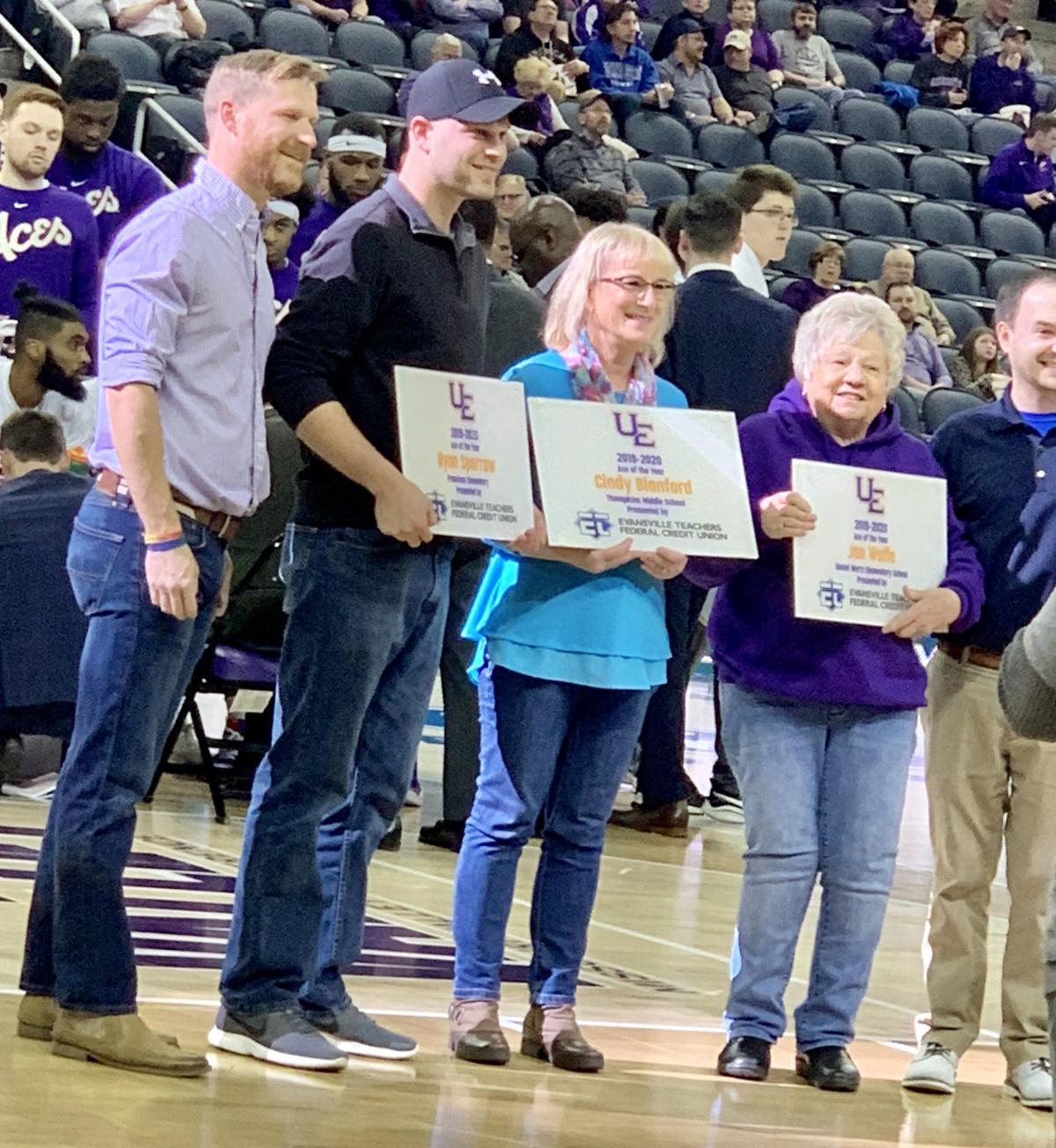 Ryan Sparrow is recognized as an Ace Educator of the Year during Sunday’s University of Evansville men’s basketball game in Evansville.

Ryan Sparrow, Francisco Elementary first grade teacher, was joined by about half his class at the University of Evansville Aces game Sunday afternoon in Evansville. Sparrow was recognized as one of the ACE Educators of Year. The Aces provided tickets for his students and their families.

Ryan Sparrow is recognized as an Ace Educator of the Year during Sunday’s University of Evansville men’s basketball game in Evansville.

FRANCISCO — You’re smart. You’re great. I love you. Do your best.

Those are the four phrases Francisco Elementary School first grade teacher Ryan Sparrow starts his students off with each day. It’s the first year he’s incorporated the mantra of sorts into his classroom, but the kids love it. They even remind him if there’s a morning it slips his mind.

Some of those helpful students joined Sparrow Sunday afternoon at an Evansville Aces game where the teacher was recognized as an Ace Educator of the Year.

Sparrow, along with two other Tri-State educators, received the honor which is chosen based on nominations from the community. The University of Evansville and Evansville Teachers Federal Credit Union opened up nominations toward the end of January.

Jane Reed, principal of Francisco Elementary and Barton Township Elementary, said the nominations for Sparrow came through the parents of students at Francisco.

Reed, who worked with Sparrow as a fellow teacher before becoming building principal, said the students love having him in class.

Reed said Sparrow goes above and beyond the call of of his job. Students who have him in class will remark even once they’re out of first grade that Sparrow was one of their favorites.

“We couldn’t be any more proud,” Reed said.

An award that comes from parent’s feedback and nominations makes a teacher feel appreciated for the work their doing, Reed said. She said teachers don’t get into education for financial gain, but because they love to teach.

“He loves his students dearly,” she said.

Reed said an honor like this helps to show that Francisco is a small school with great educators.

Sparrow, in his 10th year of teaching and seventh year at Francisco, credits the small school environment as part of what’s kept him in one place for that many years. Previously, he taught fourth grade in Morganfield, Kentucky and third grade in Henderson, Kentucky.

The Huntingburg native took the job in part to bring himself closer to home, and once he arrived he found supportive peers, small class sizes and parents willing to participate in their kid’s education.

Sparrow said he knew in about eighth grade that he wanted to be a teacher. He wanted to serve as a positive role model like many of his own teachers did while he grew up.

At first he thought teaching the older elementary grades would be his path, but he found his place in first grade.

“The growth in that year is amazing,” he said.

The students are losing their teeth, getting glasses, learning to read and Sparrow is able to “build them up all year.”

“They just love school still,” Sparrow said. “You can make them laugh.”

Working toward that goal of laughter in the classroom, Sparrow does one magic trick a day for the first ten days of school, after which he admits he runs out of material.

He also works to connect with his student outside of class when he can. Students will bring their sport’s schedules to him, and he’ll often attend games bringing along he and wife Leah’s two daughters, 4-year-old Kamryn and 2-year-old Mya.

He said he remembers from when he was in school that it can be cool to look up in the stands and see a teacher who is there for you.

It’s something that show the kids he cares, and it let’s him be there for them in a positive way, Sparrow said.

That positivity can be important, as people may not know what a student is going through outside of school.

“You greet them with a smile,” Sparrow said. “It might be the only place they get one.”

While he isn’t a fan of the spotlight, Sparrow said he appreciates the honor and any opportunity to spotlight Francisco.

Anything good he can say about the school and its staff, he wants to.