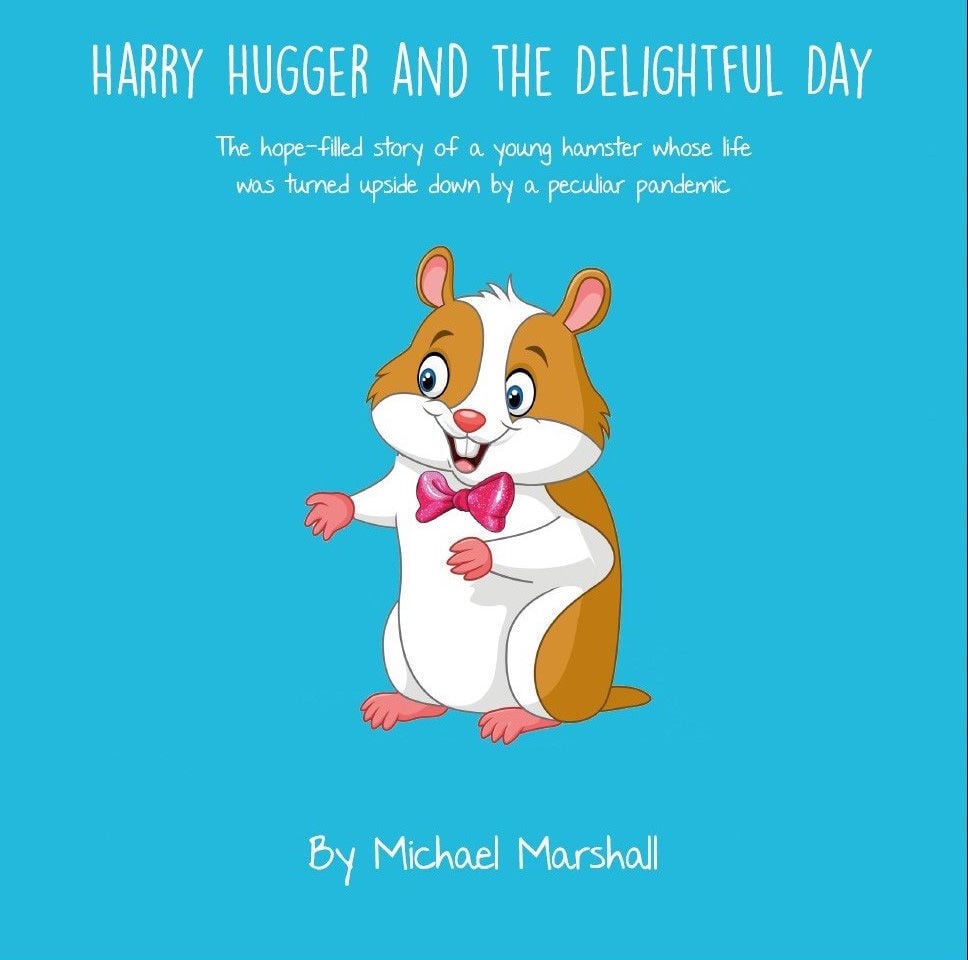 The cover of Marshall’s first children’s book, Harry Hugger And The Delightful Day is shown. 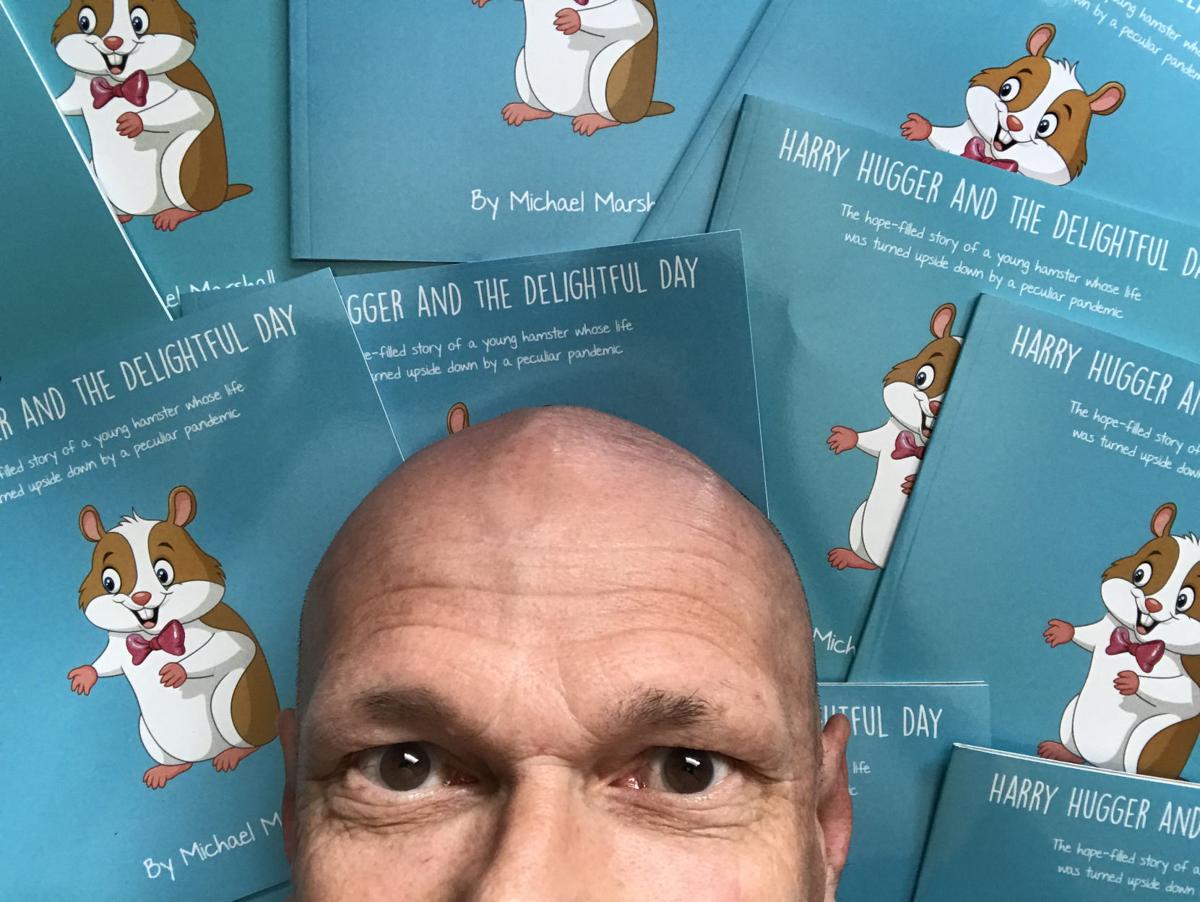 Former Princeton resident Mike Marshall’s first children’s book is being used in classroom discussion for children about the COVID-19 pandemic.

The cover of Marshall’s first children’s book, Harry Hugger And The Delightful Day is shown.

Former Princeton resident Mike Marshall’s first children’s book is being used in classroom discussion for children about the COVID-19 pandemic.

Mike Marshall believes there’s an amazing book in everyone.

Sometimes, it just takes being sidelined from all the travel responsibilities of your career in the midst of a pandemic — and some inspiration from your daughter, your sister-in-law, and a cute neighborhood kiddo.

Marshall, former owner of Princeton’s First Place Trophies and a former state and national Jaycees President, moved to Jasper 13 years ago where he has a career as business coach.

The COVID-19 pandemic keeps him close to home for now, where the idea of his first book for children, Harry Hugger And The Delightful Day, has taken shape.

“It was a confluence of things,” he said. “I was listening to a friend who is almost retired. She was struggling with the whole pandemic.” Marshall said his friend told him that she reads Crockett Johnson’s 1955 children’s classic, Harold And The Purple Crayon, for inspiration.

“It was a kids’ book but it had a nice message,” he said.

Marshall created Harry Hugger, a hamster with the superpower of hugging, who finds himself unable to use that superpower when a germ comes to town.

His book is dedicated to his daughter Taylor, who graduated from high school in the pandemic. She starts her freshman year at Indiana University this fall. “I was just watching her struggle to make sense of the thing,” he said.

And the superpower? That comes from his sister-in-law, Paula Marshall. “She is a huge hugger. She will hug people in the drive-through window. Nobody escapes without a hug, right? The pandemic hit and she couldn’t use her superpower,” he said. “It hurt other people, but it hurt the huggers really badly.”

With more time at home, Marshall found himself outdoors. “I was watching the kids in the neighborhood and talking to a friend of mine. The kids were so confused, because you could see your friends, but not play with your friends,” he said. His friend told him of her son, who always wears a bowtie. “He wore a shirt and bowtie to kindergarten,” he said.

That’s how the book of Harry Hugger and his bowtie and his superpower of hugging was conceived. “I thought there ought to be a book that explains this, especially to kids. It’s about Harry, and he loves to hug people and the struggles he has when he can’t. When the ban on hugging is lifted, he gets to go out and apply his superpower again.”

He wrote the book and worked with an illustrator, publishing it through Amazon. It’s available at Amazon.com and at HarryHugger.com.

And now, he’s getting calls from teachers, librarians and principals, who have been buying the book to use the first week classes resume, to talk about issues in a pandemic.

“I started writing a discussion guide with help from teachers. A draft version is available on the website. Anyone can download it,” he said. “I hadn’t even thought about that.”

He’s nearly finished with a second Harry Hugger book. “It’s getting pretty close,” he said. “It’s snatched from the headlines, how we react to and deal with people who are different than us.”

The second book will be available in other formats. Marshall said he learned a lot about not only writing, but also about bringing a book to the reader. He’s participated in Zoom calls and book writing club discussions to help people with their creativity.

“Writing and publishing the book was fun and scary. I was surprised, once it went public, by the large number of people who reached out to tell me their story of the book that they had almost written. The stories ranged from almost authors who had gotten right up to the point of publishing, to people who had an envelope full of notes that they planned to, someday, formulate into their book. Some told stories of endless re-writes of a book that was perpetually never good enough to show the world,” he said.

Marshall said writing and publishing your book takes courage, and can make a difference. “In the words of Meatloaf, ‘Two out of three ain’t bad.’

“You will make mistakes. I made mistakes, lots of mistakes. I even had to ask for help. I was forced to admit there are things I don’t do well and don’t know. These things are very difficult for me — I am a man. The experience has been totally worth it and I may have helped some kids along the way. I would call that a delightful day. I believe there is an amazing book within everyone.”