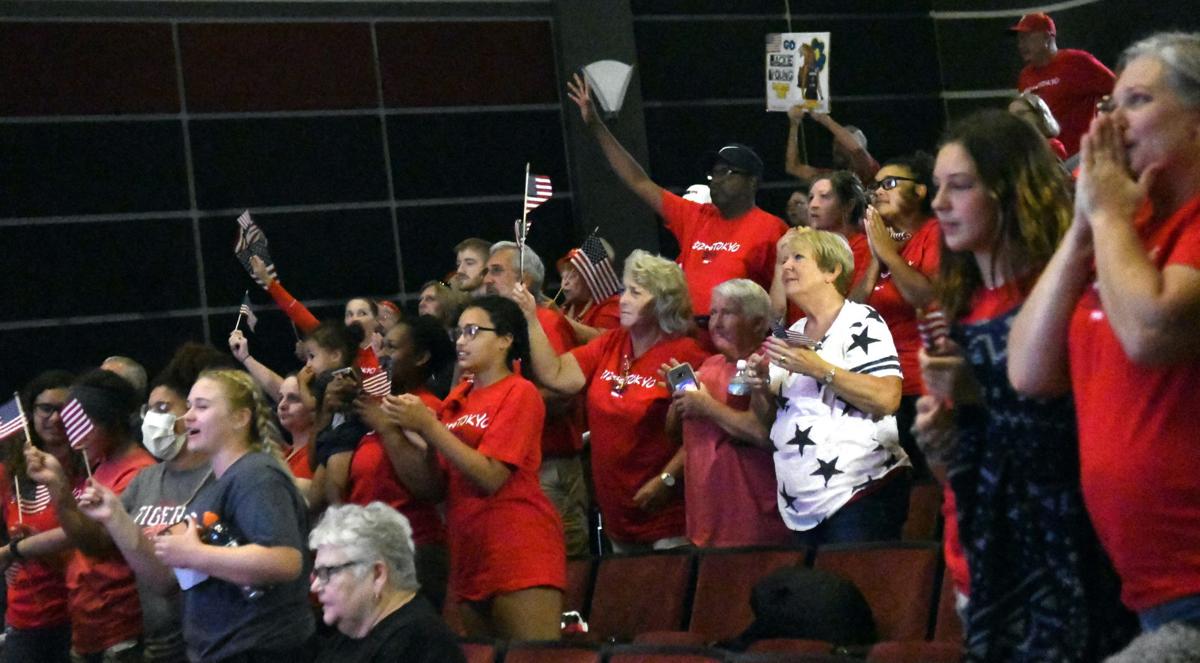 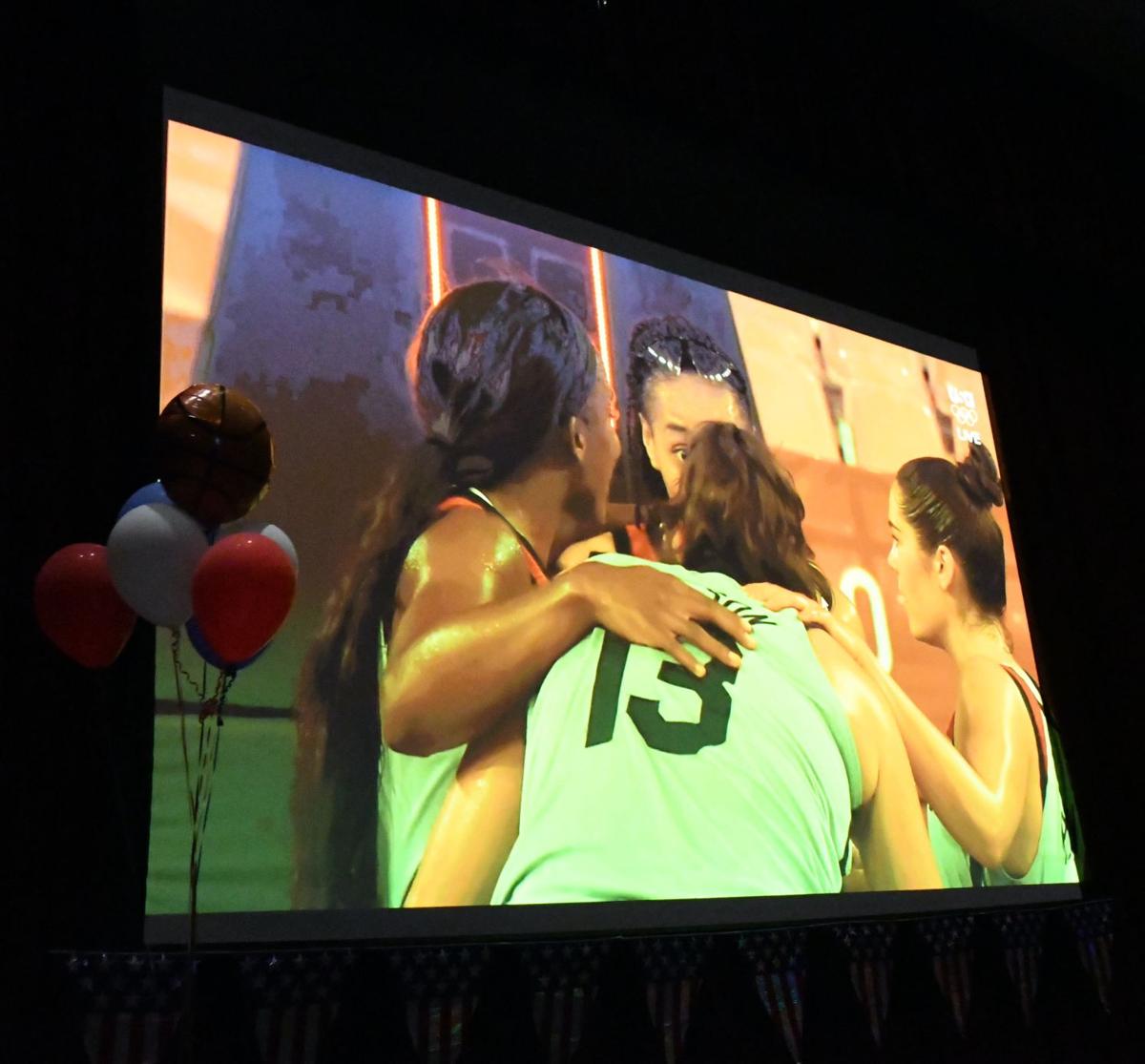 Locals watched Young and Olympic teammates hug one another after winning the first-ever gold medal in 3x3 Women’s Basketball competition from the big screen at Princeton Theatre and Community Center Wednesday. 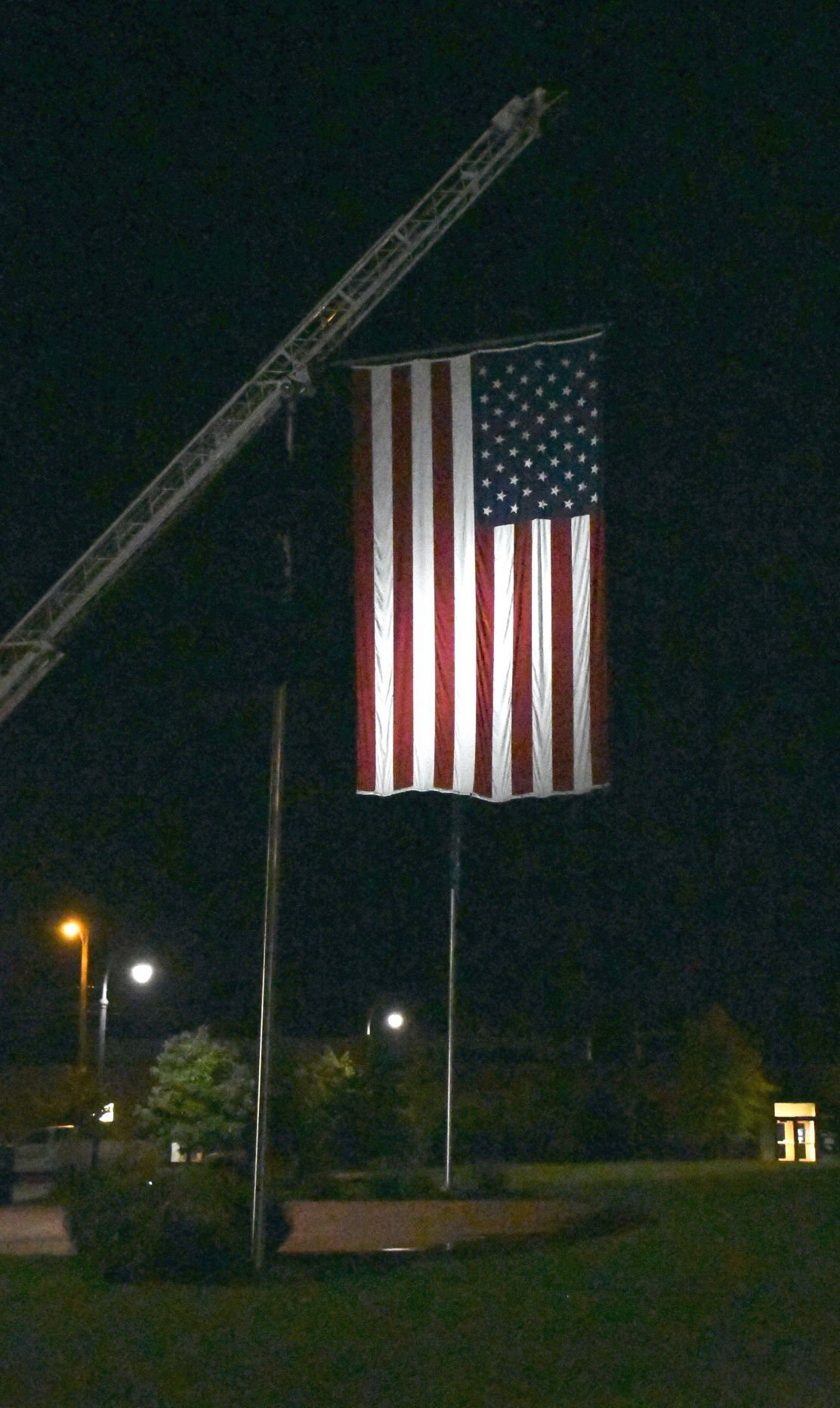 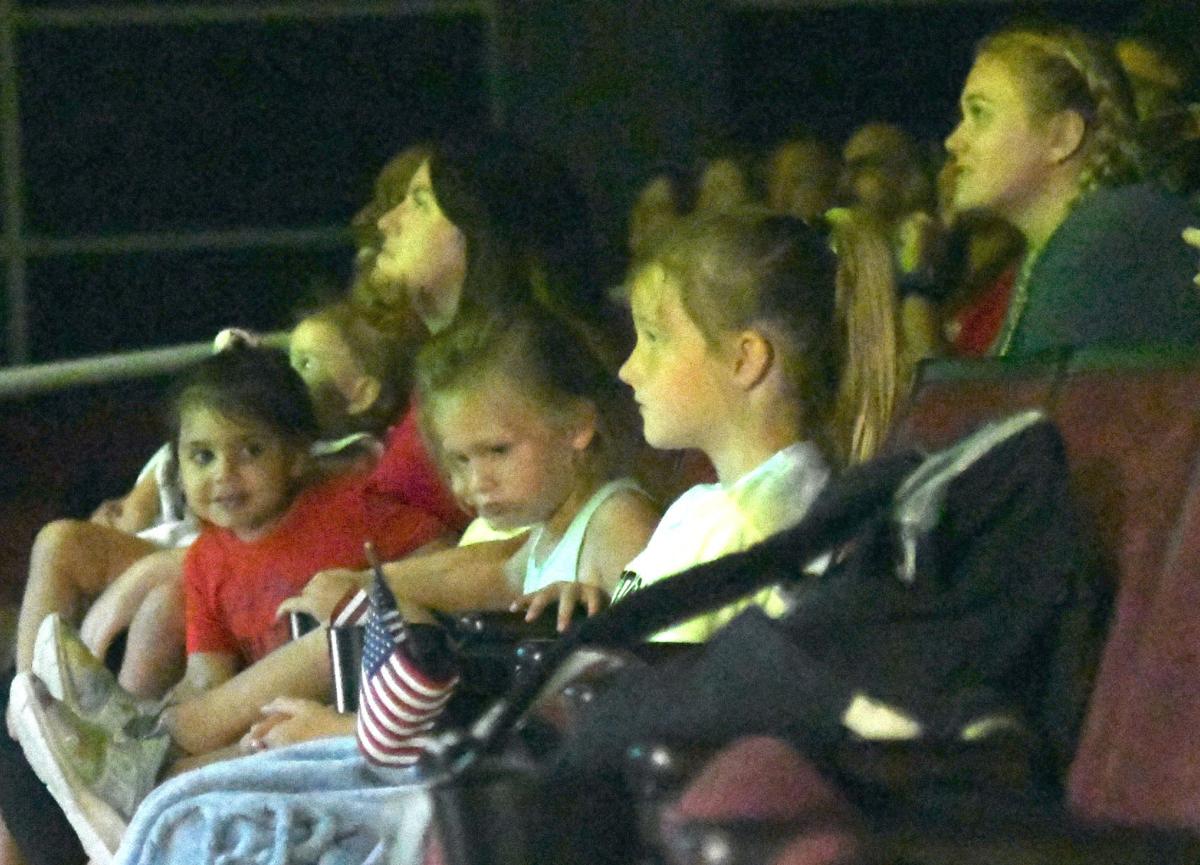 Sometimes there’s a good reason to stay up late — or rise early! These youngsters had a front row seat for a 3 a.m. viewing party of Jackie Young and the USA Women’s 3x3 Basketball Olympic competition Wednesday. 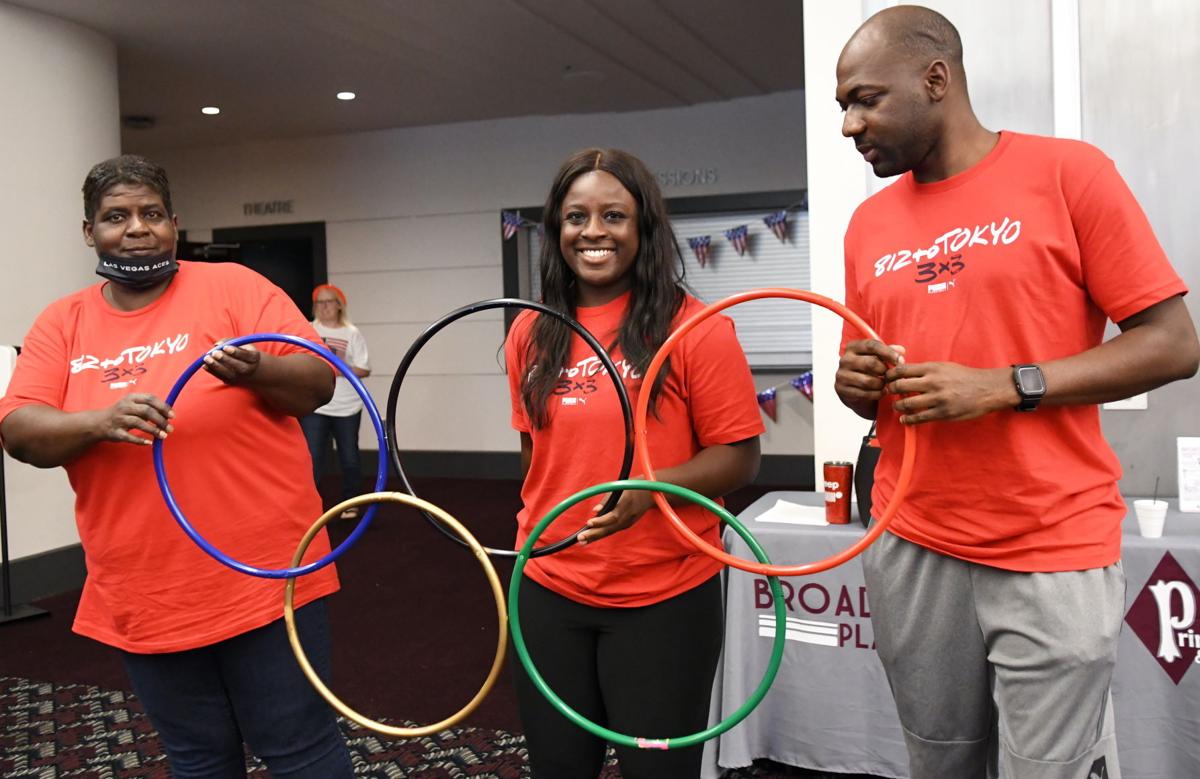 Locals watched Young and Olympic teammates hug one another after winning the first-ever gold medal in 3x3 Women’s Basketball competition from the big screen at Princeton Theatre and Community Center Wednesday.

Sometimes there’s a good reason to stay up late — or rise early! These youngsters had a front row seat for a 3 a.m. viewing party of Jackie Young and the USA Women’s 3x3 Basketball Olympic competition Wednesday.

PRINCETON — Jackie Young has given Princeton yet another reason to celebrate — and that's what's happening Saturday, as the community welcomes the gold medalist Olympian home with a parade through town.

Spectators are asked to line Broadway Street and show their support as Young is escorted in a 4 p.m. Saturday parade with her family that will make two laps from the downtown square to McDonald's on West Broadway.

The parade is planned just prior to a back-to-school Backpack Bash at Lafayette Park for North Gibson students and parents, which is sponsored in part by Young and Puma Apparel and Footwear.

The parade caps a week of anticipation for the next big accomplishment of the 2016 Princeton Community High School graduate, who made a whirlwind trip to Tokyo after her vacation was interrupted with a call to join the USA women's 3x3 Olympic basketball team, taking the place of team member Katie Lou Samuelson, who tested positive for COVID-19.

Young, who previously played for the USA 3x3 team during her NBA off-season, stepped right into her new role in the scrappy full-tilt basketball action after landing in Japan late last week.

As the USA team's chances of claiming a medal solidified, the Young family invited fans to join them for an early morning viewing party at of the 2:55 a.m. Wednesday semifinal match with France.

Princeton Fire Territory's garrison flag was on display at Bicentennial Park across the street from the viewing party at Princeton Theatre and Community Center, as fans made their way to the marquee entrance, ignoring the 14-hour time difference from Tokyo to Princeton in the wee hours of the morning.

About 140 fans armed with cookies and coffee, plenty of red, white and blue flags and glitter hats — and some with blankets — filled the theater for the USA team's 18-16 win over France.

The win set the stage for a short nap to return for the 7:55 a.m. gold medal match with the Russian Olympic Committee squad. Parking spots filled quickly around the theater, and more fans arrived, including school and city officials. Council member Jan Ballard, munching on a sandwich on his birthday, said an Olympic gold for Young would be a most memorable birthday present.

See inside a tiny home built for the homeless

Feds: Majority of Afghans at Indiana’s Camp Atterbury had ID and all were vetted

Young took some hard knocks in the gold medal match, finally drawing a foul and hitting 2 for 2 at the line in the 10-minute 18-15 gold medal win. Young hit 100% from the line in eight-game competition.

The Russian team never came closer than 3 points to the USA squad, but the gold medal bout was high intensity for the Princeton viewing crowd. When an internet lag caused the game to stall out at the theater, super-fan Jon-Jon Greene went grabbed her phone and began calling out scores in the play-by-play until the action resumed on the big screen.

As the USA team hugged one another on the screen with their win, the theater erupted in cheers and flags waving in the air, and somewhere outside the theater, firecrackers sounded.

Interviewed after the win and informed that there were 140 people in Princeton watching her in the early morning hours, Young smiled. "It's just crazy how much they have supported me," she said, making note of the high school team's state championship, the fans who followed her in her Notre Dame career, those who celebrated her first-round pick in the NBA draft and traveled to Las Vegas or Indianapolis to cheer her on with the Las Vegas Aces. "You guys mean the world to me," she said to fans, "I'll see you all soon."

When she had a chance to sift through her thoughts, Young posted on social media:

"We did it!!! OLYMPIC GOLD MEDALISTS!

"To my family, y’all are the best! Words can’t describe the love I have for y’all and how thankful I am to have such a supportive loving family. Y’all have been here through it all," she wrote.

She thanked her boyfriend for "keeping me calm and dealing with stressed out, anxiety filled Jack," and called her circle of friends "the best friends ever!"

For her hometown Princeton, Young wrote, "Thank you! Y’all are amazing! The support y’all show is unmatched! Thank you for sacrificing your sleep this week to support and cheer on me and my teammates...from watching at home to having watch parties at 3 a.m. I can’t thank y’all enough. Princeton, see y’all soon."