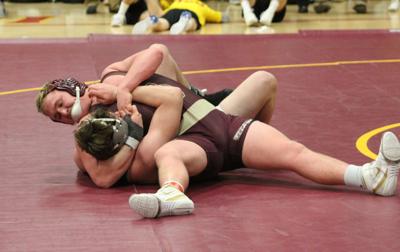 It was not quite the record-breaking season from a season ago, but the Gibson Southern wrestling team once again found much success on the mats this winter.

The Titans placed third in the Pocket Athletic Conference team standings and advanced five grapplers from the sectional — four of which qualified for the semistate.

A youthful Princeton Community team showed signs of improvement throughout the year and sent one wrestler to the semistate.

Six Titans make the cut as well as four Tigers.

JARED DUNN — After a disappointing end to his freshman season a year ago, the Tigers’ sophomore bounced back in a big way. The 106-pounder finished the season with a 29-8 record, including 10 pins. He led the team with 160 points accumulated throughout the season.

Dunn placed second at the Big Eight Conference individual tournament and was selected as an all-conference performer. The sophomore also placed third at the sectional, despite being a No. 4 seed and went on to qualify for the semistate with a fourth-place finish at the regional.

JACOB MOORE — The Tiger 126-pounder finished the year with a 24-8 record with six wins coming via pinfall.

Moore placed third in the Big Eight meet and fell one match shy of advancing to the regional with a fifth-place effort at the sectional.

CHRISTIAN POLEN — The Gibson Southern junior came one match shy of reaching the state finals at 132 pounds. Polen wrapped up the season with a 39-6 record as he advanced to the quarterfinals of the semistate.

The 132-pounder started the season at 138 pounds before dropping a weight class where he did not suffer a defeat until the championship match of the sectionals. He followed his sectional runners-up finish at sectional with another 2nd place effort at the regional.

OWEN BRYANT — Much like his teammate, the Titan junior also finished one win short of qualifying for the state finals. The 152-pounder finished the season with a 33-7 mark including a PAC championship.

Bryant placed second at the sectional and third at the regional. The junior was also an academic all-state selection by the Indiana High School Wrestling Coaches Association.

KEEGAN DOERNER — The Tiger 160-pounder finished the season with 21 wins in his 37 total bouts. Doerner racked up nine wins by pin and placed second at the Big Eight meet.

The Tiger grappler had his season end at the sectional with a 6th-place finish.

LANDON HOOVER — The Titan senior piled up 33 wins on the season against eight defeats as he split time between 170 and 182 pounds.

Hoover was another one of the Gibson Southern semi-state qualifiers as he placed second at the sectional and regional at 182 where he lost to state finalist Macartney Parkinson of Evansville Mater Dei.

Hoover dropped his first match at the semistate. The senior, who was named an academic all-state honoree, placed third at the PAC meet.

NICK JETT — The PCHS senior had his season cut short, but for good reason. Jett graduated at midterm as he enlisted into Marine Bootcamp.

Before heading off to Bootcamp, the 182-pounder picked up 16 wins in 21 matches. Jett tied Dunn for the team lead with 10 wins via pin.

LOGAN FAUQUHER — After a year away, the Gibson Southern 195-pounder returned to the mats and won 22 of 36 matches on the season. Fauquher placed second at the PAC meet where he injured his knee which prevented him from competing in the sectional, where he would have been seeded No. 3. Fauquher was also named to the academic all-state team.

MACRAY ROBINSON — The Titan senior may have experienced the most arduous season of anyone in the area. The 220-pounder finished the season with a 36-6 record with all six losses coming to state-ranked guys. Five of his losses came against grapplers who placed in the top seven at the state finals and the other loss was to a state-ranked grappler from Tennessee.

Robinson placed third at the PAC meet before finishing as runner-up at the sectional and regional. He won his first match at semistate, before an injury in his quarterfinal match hampered him in his season-ending loss. Robinson also picked up his 100th career win earlier in the season.

AARON BREIVOGEL — There may not have been anyone who experienced more mat time than the Titan heavyweight. Breivogel racked up 34 wins in his 40 matches as he went into overtime several times throughout the season.

The Titan senior was crowned champion at the PAC meet and finished third at the sectional before his season came to an end with an upset loss in the first round of the regional.