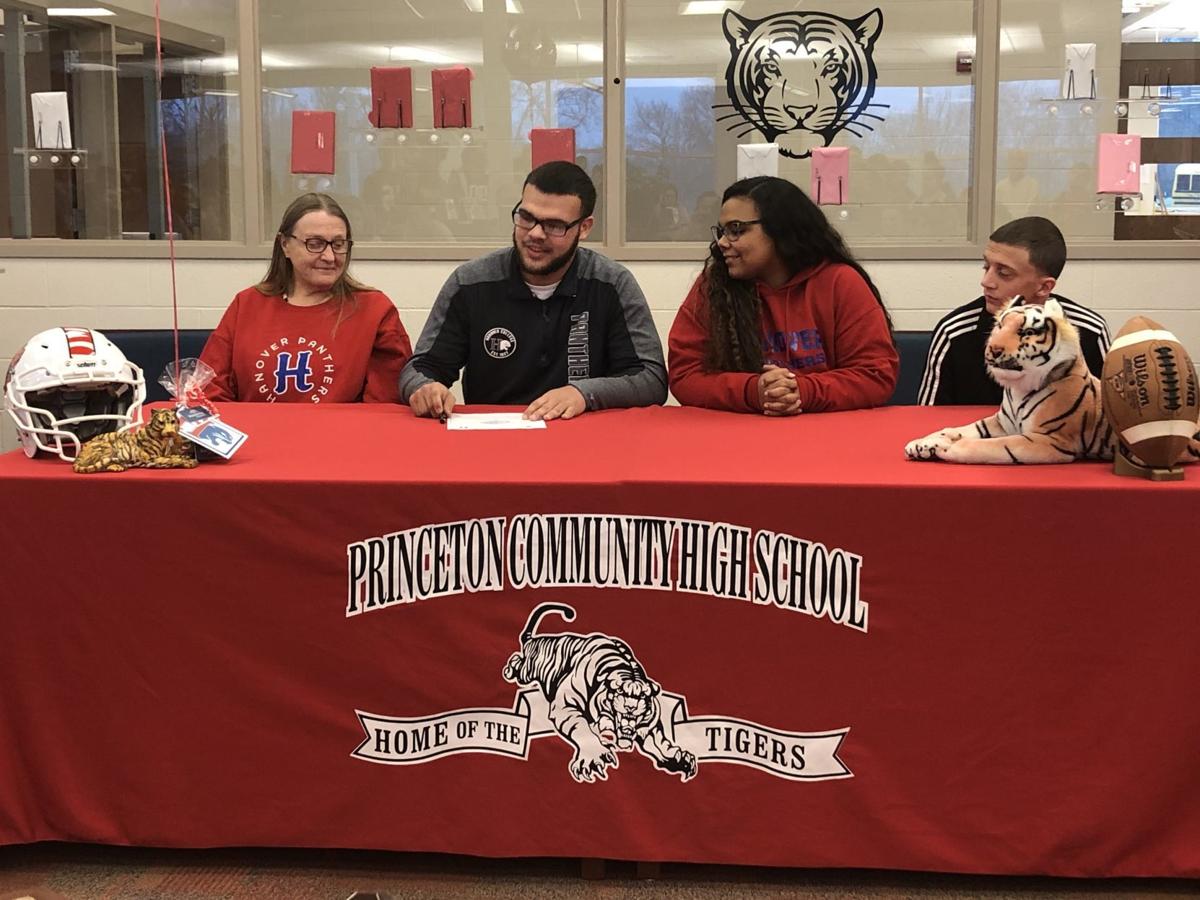 Johnny Holland (far right) sits in with 2019 PCHS grad Devonte Hardiman (second from left) as Hardiman signed his national letter of intent to continue his academic and football playing career at Hanover College last winter. Holland and Hardiman have been close friends over the last few years. 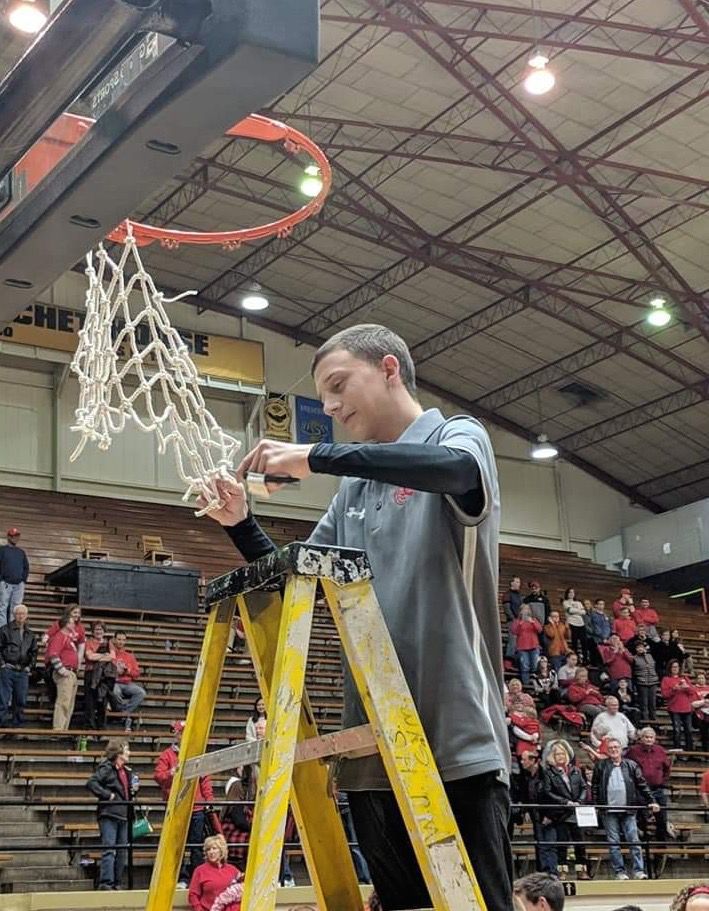 Johnny Holland cuts down a piece of the net during last seasons boys' basketball sectional championship. Holland was a student manager for the Tigers. 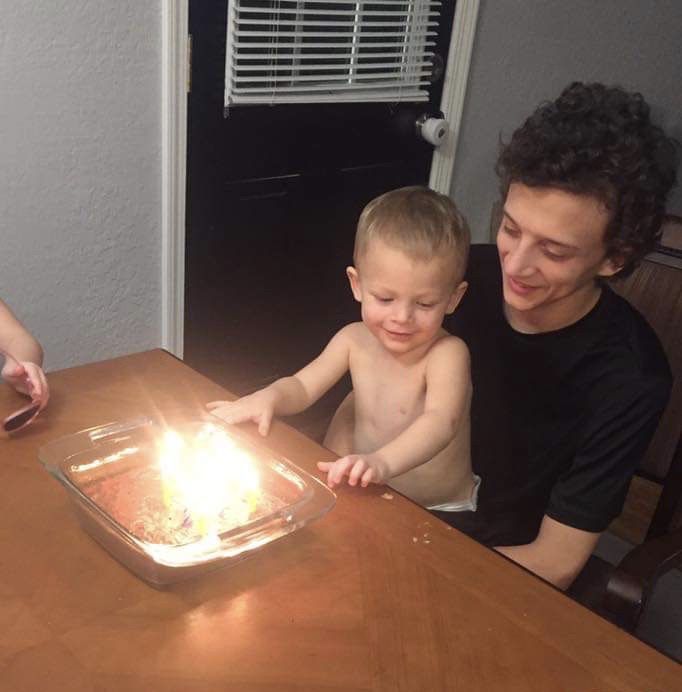 Left: Johnny Holland share a moment with Jaxton Maners, the son of Brittany and Jared Maners, at their home. Right: Johnny Holland cuts down a piece of the net during last season’s boys’ basketball sectional championship. Holland was a student manager for the Tigers. 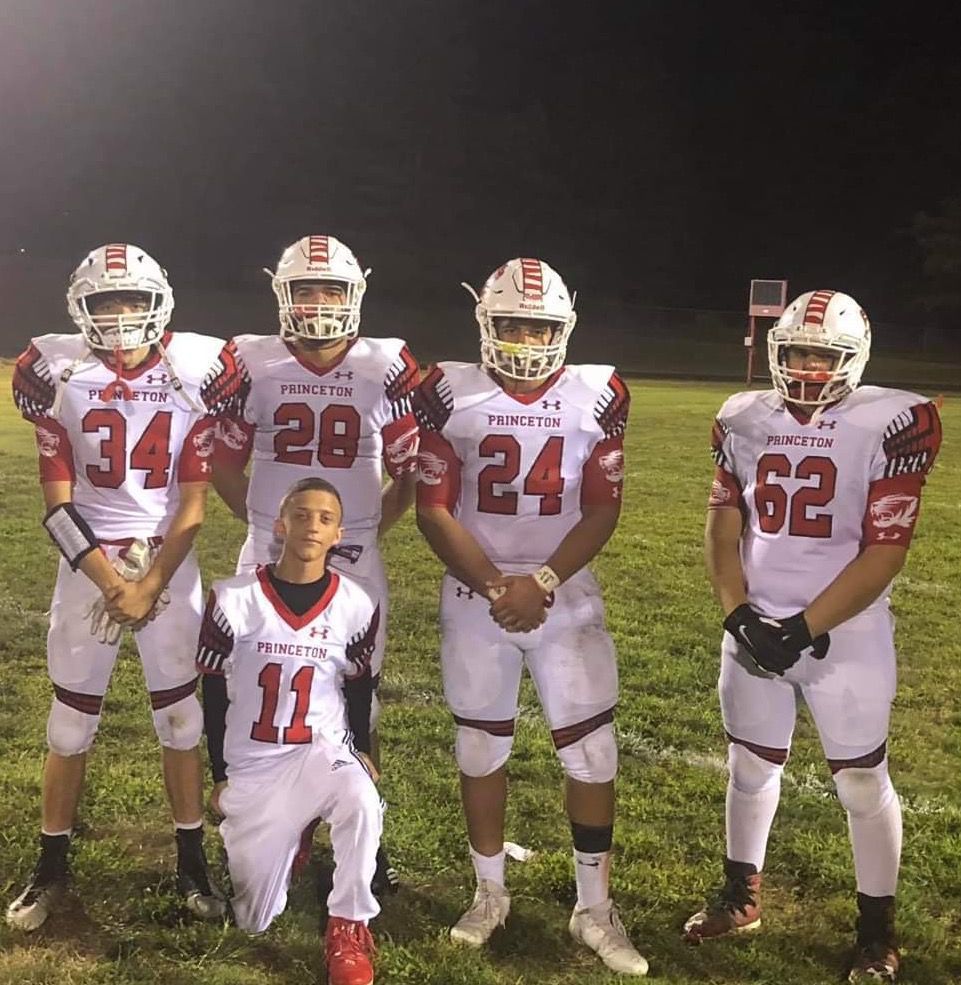 Director of Football Operations, Johnny Holland (No. 11) poses for a picture with PCHS players. 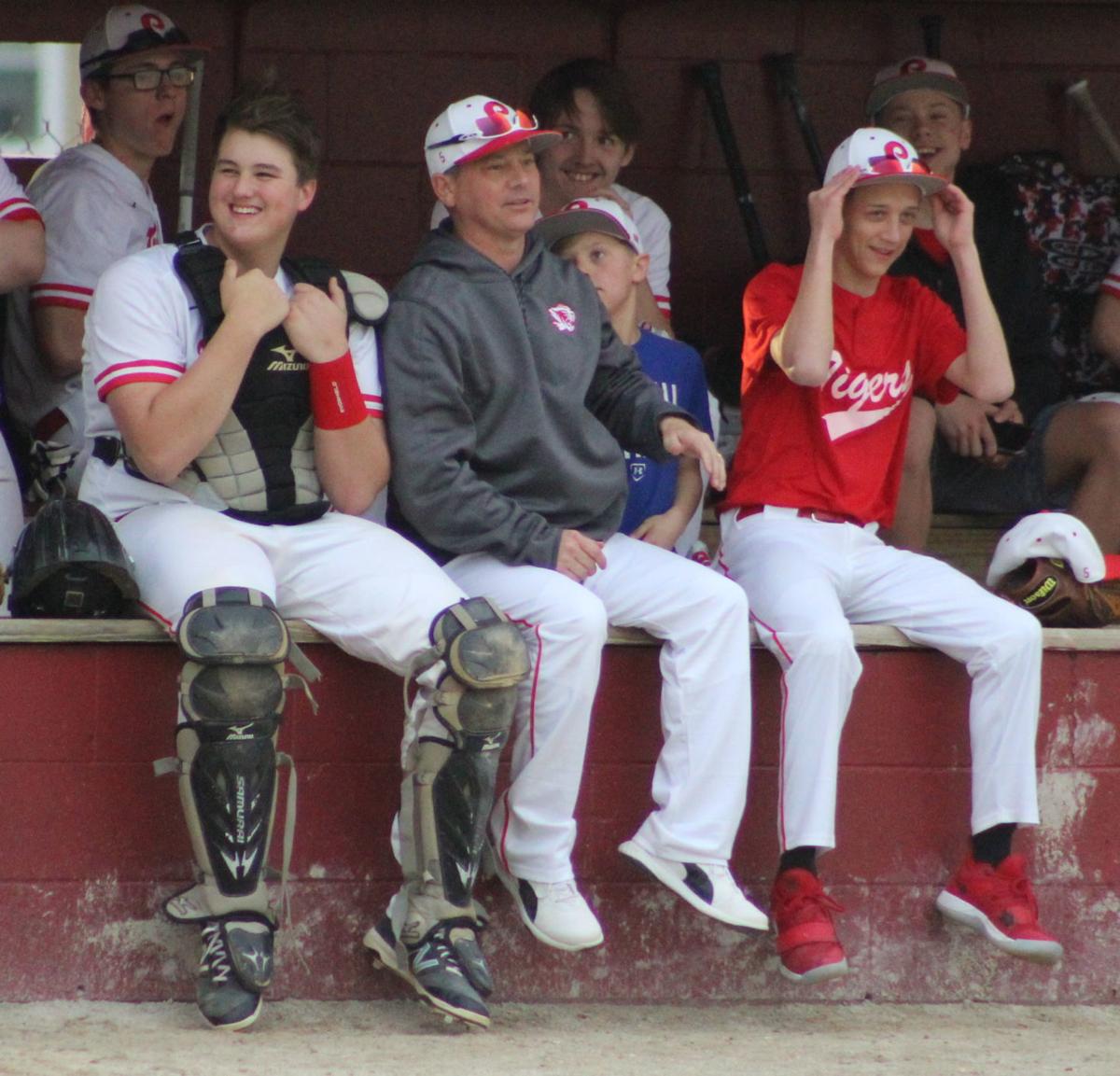 Johnny Holland (far right) sits in with 2019 PCHS grad Devonte Hardiman (second from left) as Hardiman signed his national letter of intent to continue his academic and football playing career at Hanover College last winter. Holland and Hardiman have been close friends over the last few years.

Johnny Holland cuts down a piece of the net during last seasons boys' basketball sectional championship. Holland was a student manager for the Tigers.

Left: Johnny Holland share a moment with Jaxton Maners, the son of Brittany and Jared Maners, at their home. Right: Johnny Holland cuts down a piece of the net during last season’s boys’ basketball sectional championship. Holland was a student manager for the Tigers.

Director of Football Operations, Johnny Holland (No. 11) poses for a picture with PCHS players.

PRINCETON — When people think about Princeton, Jackie Young is often the first thought — and rightfully so. The 2016 PCHS grad, who went on to win a national championship at the University of Notre Dame and last spring ended up being the No. 1 selection in the Women’s NBA, is often referred to as “The Pride of Princeton.”

Again, hard to dispute with all of her accolades.

But Johnny Holland may just trump Young for the title of having the most Tiger Pride.

You certainly will not hear any complaints from most people currently associated with Princeton Community High School.

“Johnny Holland is the epitome of school pride,” Lady Tigers basketball coach Brittany Maners said. “He bleeds red and white for the Tigers and is a tremendous asset to all athletic programs here at PCHS. He has a tremendous amount of pride for his school and is willing to do whatever it takes to benefit our programs.

“Johnny’s dedication and impact to my team and my family is immeasurable. We all love Johnny Holland.”

The 2019 PCHS grad is currently employed by the North Gibson School Corporation as part time help in the maintenance department.

In a rather unique situation, Holland did not initially apply for the job.

“We approached Johnny and asked if he would want to be a part of our team,” PCHS athletic director Jason Engelbrecht said. “That is something we typically do not do for someone who has recently graduated. But he is someone who has been an integral part of our athletic programs while he was a student here...the kind of school pride he exudes, myself and some of our other building leaders and central staff wanted to find a way to keep Johnny in our programs and facilities.”

Although Holland can be spotted — usually wearing a smile from ear-to-ear — at most sporting events, he is almost exclusively a part of the Tiger basketball and football programs.

He is responsible for getting the players uniforms and practice gear ready for games and practices in addition to making sure the facilities are set up. During Lady Tigers basketball games, Holland also helps with a few in-game management duties.

“I like to keep track of fouls and timeouts during the game to let the coaches know,” Holland said.

On the gridiron, he even has a specific title.

“Johnny is a worker bee,” the third-year coach said. “His commitment to the Princeton football team is second to none. He has been with me from the start and will be with me as long as I am coaching football here at Princeton.”

The Tigers gridiron coach also noted the two share a bond outside of the field as well. Holland rides to school with Maners everyday and is often invited over to their home for dinners and other family functions.

“He is a very loyal friend and we spend a lot of time together outside of work,” Maners said. “I enjoy hearing his input after games and cherish our conversations about sports and life on our way to work every morning.”

After all of his pregame prep is completed, Holland can also be spotted interacting with the Maners’ two younger children, Jaxton and Brynlee.

“They are all like a family to me,” Holland said of the Maners family.

Devonte Hardiman is another former standout Tiger athlete who is like family to Holland.

Both graduated last season, and Hardiman made Holland a promise after his final football game in a Tiger uniform.

“Johnny was always our biggest supporter, in not just football but all athletics,” Hardiman said. “We had a special relationship and I remember after my last high school football game, I told Johnny he would have a seat next to me wherever I signed (letter of intent for college).”

A few months later when Hardiman chose to continue his playing career at Hanover College, Holland was right there by his side during the signing.

“I am sure it meant the world to him, but it was the least I could do after all the support he has shown towards me.”

This past fall, Hardiman led Hanover in sacks on the season, won conference defensive player of the week awards twice before being named to the all-conference team.

“He is an animal,” Holland said of his friend.

When asked why he and Hardiman have such a close bond, Holland did not hesitate to answer.

“He has always treated me like a brother, on and off the field,” he said. “And I am glad I got to be there for his signing.”

Holland also followed Young closely as she was making history in the Tigers uniform. And although Young is one of his top female athletes at PCHS, a moment he got to experience last season may take the cake for memorable moments.

“It was awesome to see the (boys’ basketball team) win the sectional and make it to the regional championship,” Holland said. “It’s been a lot of fun sitting on the bench for a lot of sectional championship games and it was also great that Jared (Maners) included me in for senior day last year.”

“Johnny is exactly the type of kid that you are honored to have associated with your program,” Haywood said. “He did all the behind-the-scenes stuff that made life on us coaches a lot easier. But the thing I remember the most is that he lived and died with his Princeton Tigers. Win or lose, he was always upbeat and positive. I could always count on Johnny.”

Holland is not shy about letting his allegiance be known during games. If a player makes a great player, Holland is their biggest fan and is often the first to give them a high five when they come off the court. If a ref misses a call, Holland will also let it be known.

“As long as I am not on the bench,” Holland said with a smile of giving the refs a hard time.

And Engelbrecht, although he is full of spirit, it’s never in a negative way.

“There’s times after games Johnny will come up to me and apologize for being animated,” the AD said. “I always tell him he does not need to apologize for expressing school pride because he does so the right way.”

Aside from his pride, Engelbrecht Holland possesses another trait which made the PCHS staff want to keep him in the fold.

“Our final home game in the 2018 season we played Vincennes Lincoln and it was pouring down rain, but Johnny did such an exceptional job in helping the officials keep the balls dried, we received a letter on him,” Engelbrecht said. “We lost that game, but receiving that letter (from an IHSAA official) about Johnny made us all so proud. We actually received an extra point in the sportsmanship award because of Johnny. At the end of the day, we all want to win, but having someone who displays that kind of leadership, that is who you want to have around.

“We all love Johnny and we hope he is around for a long time.”