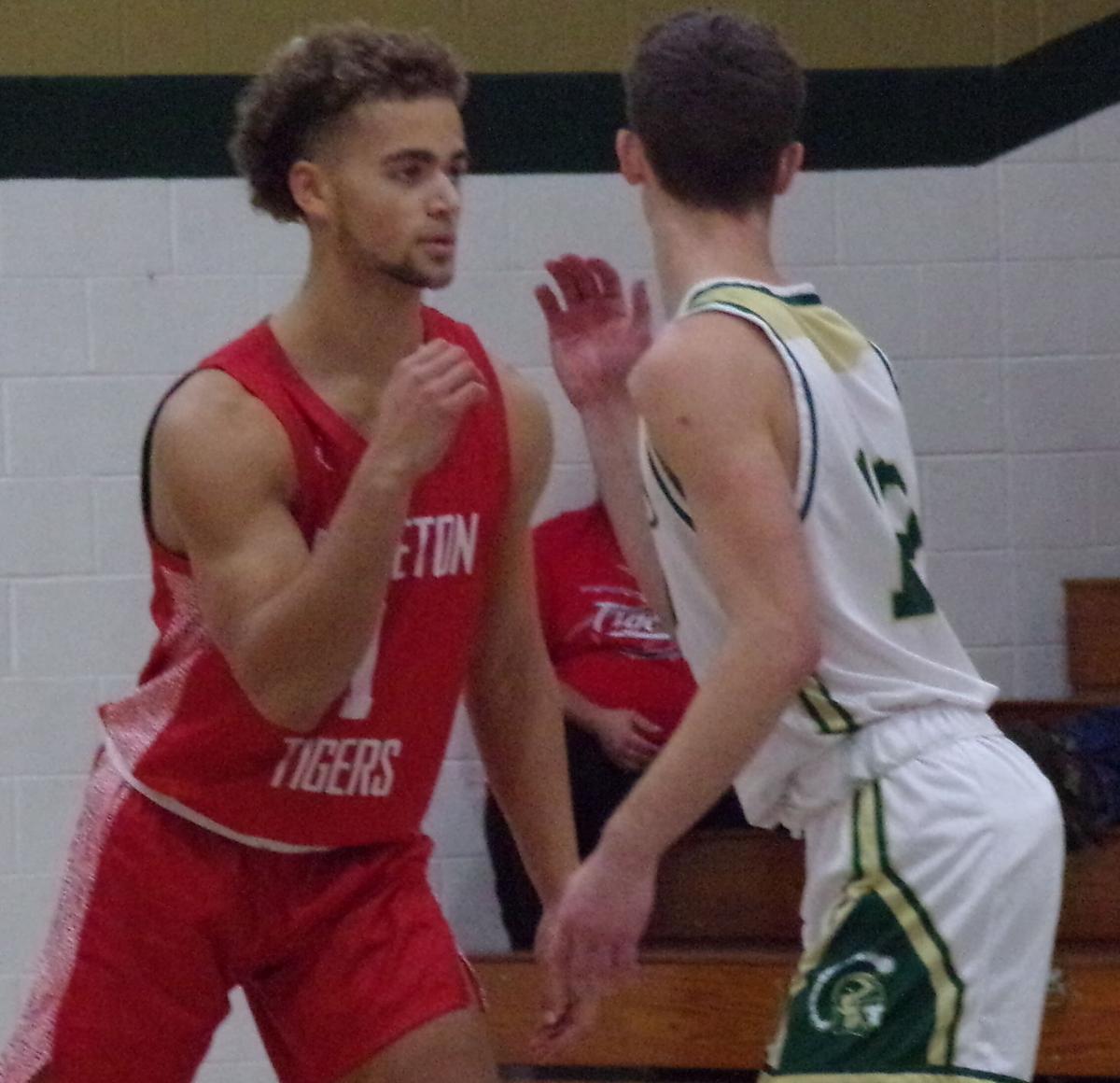 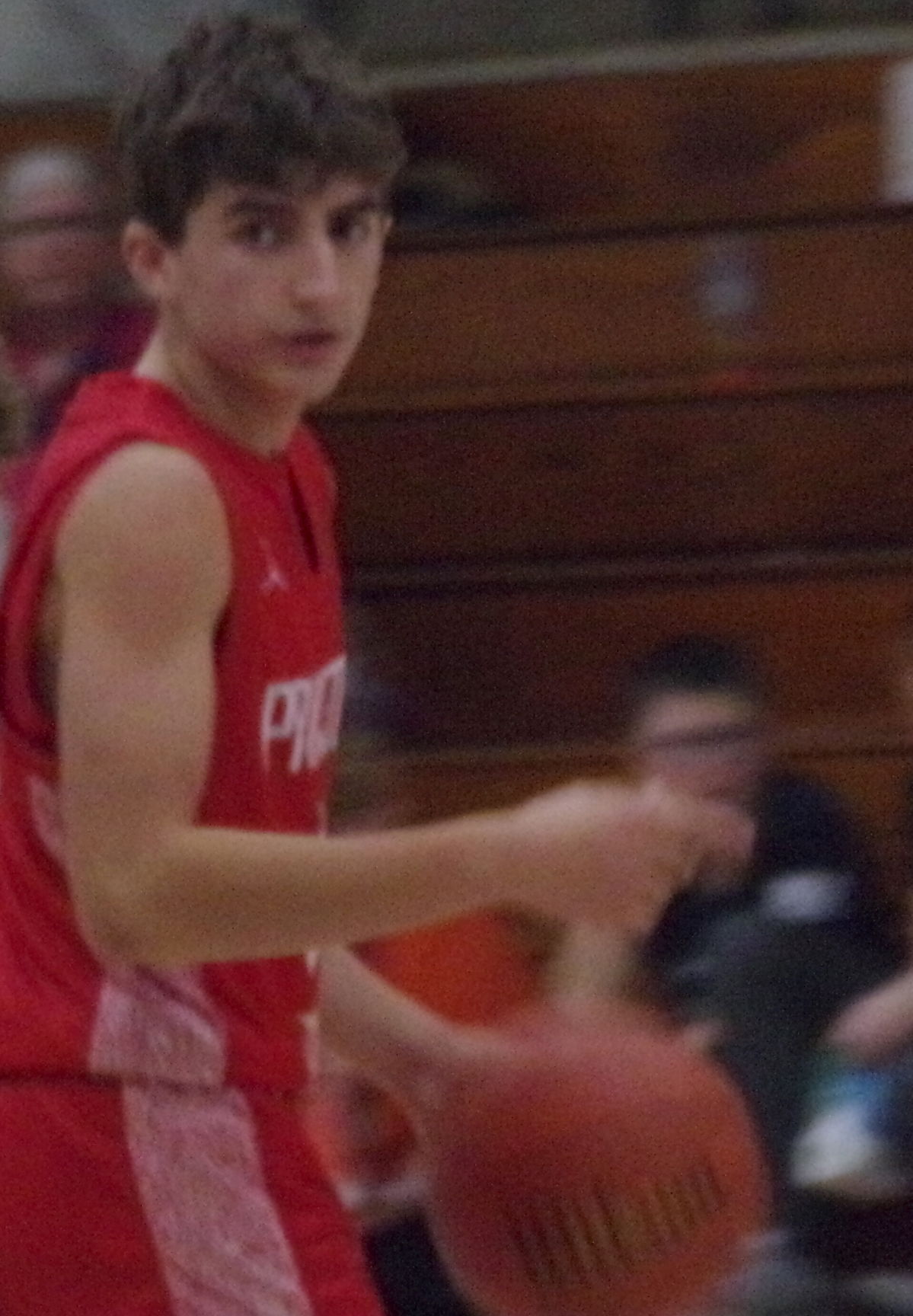 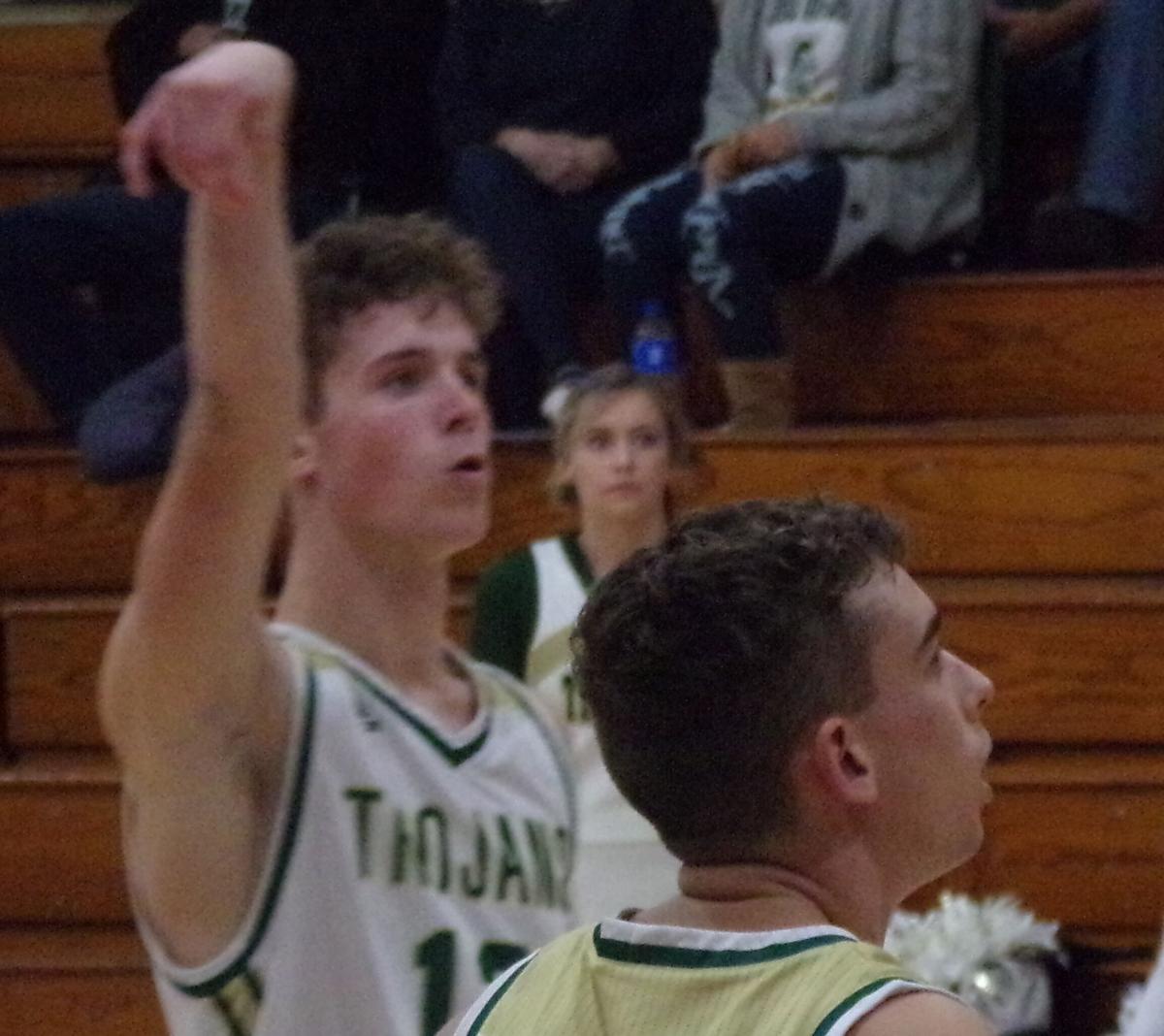 Wood Memorial junior Kaden Newton watches his third-quarter free-throw attempt fall in during his Trojans 44-41 loss to Princeton Community Tuesday. Newton went 4-for-4 from the charity stripe and scored a team-high 14 points. 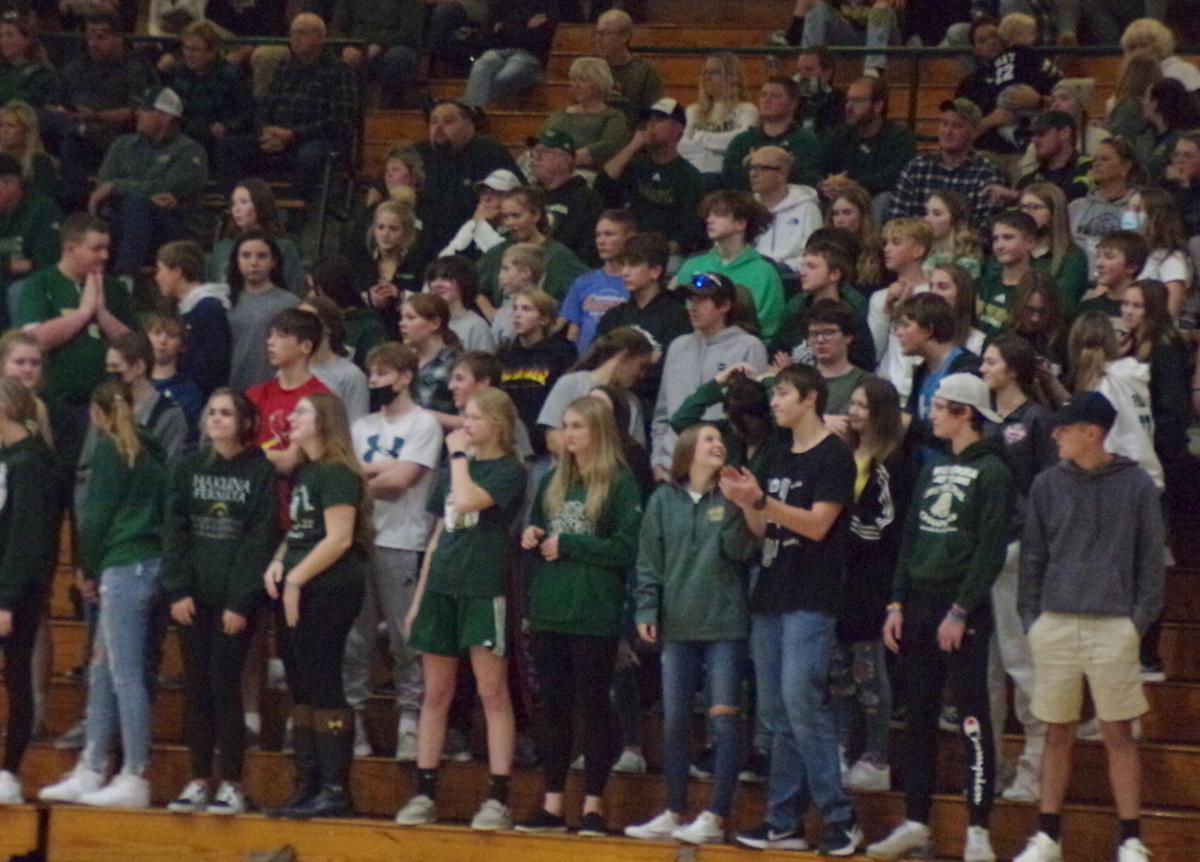 The Wood Memorial student section packed into their home gym to support the Trojans’ boys basketball team during their season opener against Princeton Community Tuesday.

Wood Memorial junior Kaden Newton watches his third-quarter free-throw attempt fall in during his Trojans 44-41 loss to Princeton Community Tuesday. Newton went 4-for-4 from the charity stripe and scored a team-high 14 points.

The Wood Memorial student section packed into their home gym to support the Trojans’ boys basketball team during their season opener against Princeton Community Tuesday.

OAKLAND CITY —Everything the 2020-21 season could not offer due to COVID-19 restrictions was on full display in Oakland City Tuesday, where the Princeton Community Tigers edged out the Gibson County rival Wood Memorial Trojans 44-41 in the 2021-22 regular season opener for both teams.

Full student sections for both teams, a nearly full gym of fans and tension-filled moments you could cut with a knife all made their return to Southwest Indiana in a game that went down to the very final second.

"I most definitely missed it," Princeton Community head coach LaMar Brown told the Clarion after his team's victory. "I feel myself going horse. The empty gyms last year did wonders for my voice."

The first half saw both offenses show signs of rust as Princeton outscored Wood Memorial 9-8 in the first quarter, but the Trojans answered with an 11-8 second quarter run to take a narrow 19-17 lead into halftime.

Wood Memorial's first half scoring was led by junior Kaden Newton, who scored eight points in the half while senior Drew Morris, despite playing just a few minutes due to foul trouble and freshman Jace Jenkins led PCHS with four points each.

In the third, the Tigers offense began to break out as Tanner Engelbrecht splashed a three, Jenkins cashed in after being fouled on a three-point attempt to make three free throws and Morris scored four points to guide PCHS to an 18-8 run and 35-26 lead heading into the fourth.

With their home crowd behind them, the Trojans slowly chipped away at the Tigers' lead throughout the fourth quarter as they pulled within two points in the game's final minutes.

All hope appeared to be lost for the Trojans when freshman Josiah Memmer missed a game-tying basket from close range with 29 seconds left, but with 21.9 ticks left, the Tigers turned the ball over, giving Wood Memorial's offense another chance.

The Trojans would cash in as senior Owen Day, who had to leave the game twice earlier due to a bloody cut above his eye, nailed a game-tying shot with under 15 seconds to play.

Princeton would drive down the floor where after senior Colton Smith missed a three-pointer, the Tigers got the ball back after it went out of bounds off Wood Memorial.

With the ball in his hands with 5.9 seconds to play, Morris was fouled by Day, putting the Tigers at the free-throw line in the double-bonus as the foul was the 10th on the Trojan in the half.

Morris, who missed two free throws less than a minute early, missed the first shot but watched the second roll around the rim and in to give PCHS a 42-41 lead with just under six seconds left.

The Trojans would commit a turnover after in-bounding the ball and were forced to foul again with 1.5 seconds.

After a stop in play due to a mini scuffle between the two teams, Morris went back to the line after being intentionally fouled and sunk a pair of free throws to make it 44-41.

Day would have enough time for a half-court heave but it would miss off the backboard as the visiting Tigers held on for a three-point opening night win.

"I would like to really to applaud both groups," Brown said. "Wood really brought the fight, coach Schoonover (Wood Memorial head coach Brian Schoonover) having his first game back home and his kids came out and fought hard for him.

"Kudos to our kids too; we've said before we don't want to be bullied night in and night out. I felt we didn't necessarily answer the call in the first half, but we responded in the second half with some of the things we were doing and believed we were a lot more physical."

Morris, the lone returning varsity player with multiple games of experience for the Tigers, led all scorers with 15 points as he shot a near-perfect 6-for-7 from the field. He shot just 3-for-6 from the charity stripe, but the three he made proved to be the game-winning and sealing free-throws.

"A great moment for the kid to start our season," Brown said of his senior. "After going 0-for-2 a possession or two earllier and to step up and knock those down was a huge moment for him and I'm glad he got to have that moment to kick off our season."

"We've got to be physically and mentally tougher and we've got to take care of the basketball," Brown said when asked what he wants to see improve most going forward. "The biggest thing is we have to do a better job communicating with each other, there's too much talk coming from the sidelines and I need five guys on the floor doing it together."

Newton led the Trojans scoring efforts, who scored 14 points by shooting 5-for-11 from the field and a perfect 4-for-4 from the free-throw line.

The 1-0 Tigers will host Evansville North for their home opener Saturday, while the 0-1 Trojans will be off until Friday, December 3, when they'll visit Blue Chip Conference rival Loogootee.