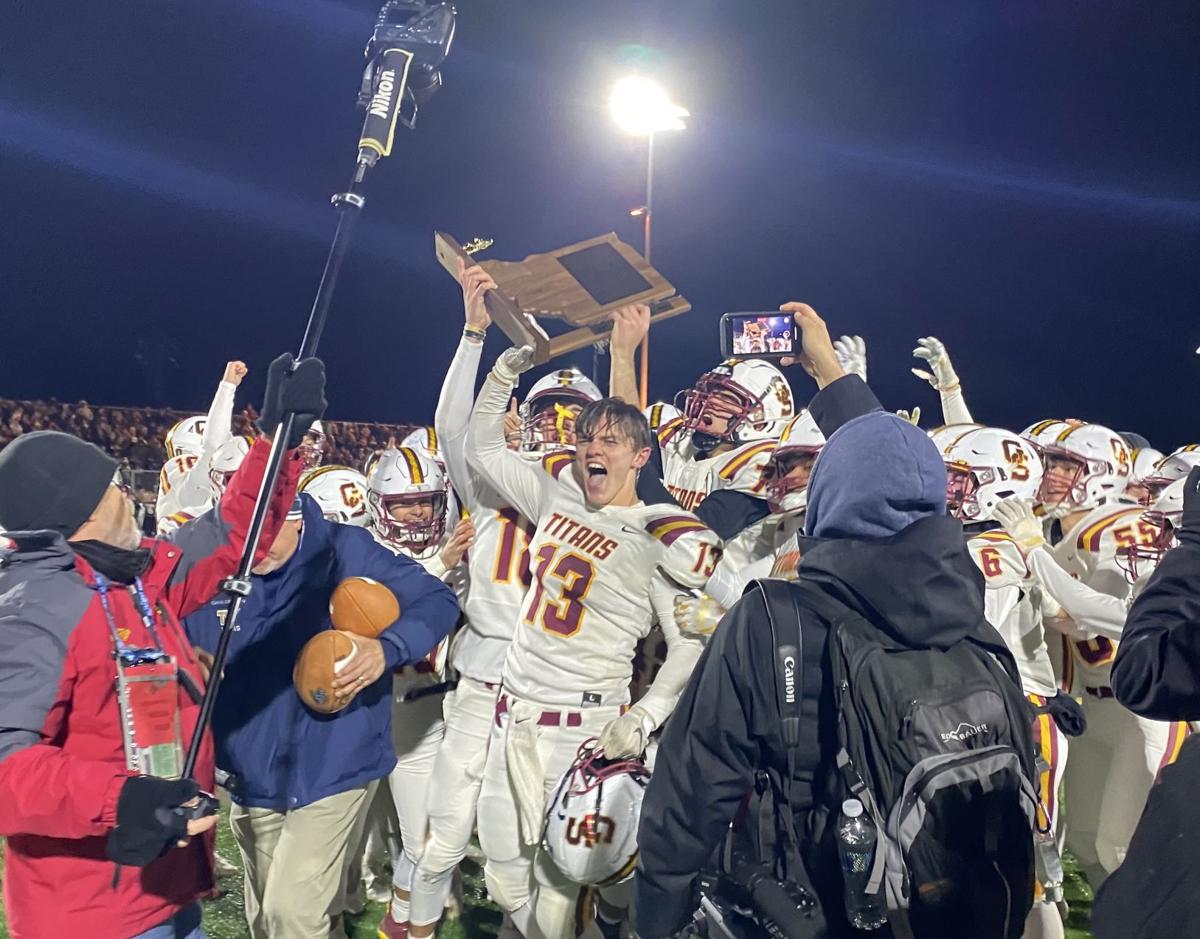 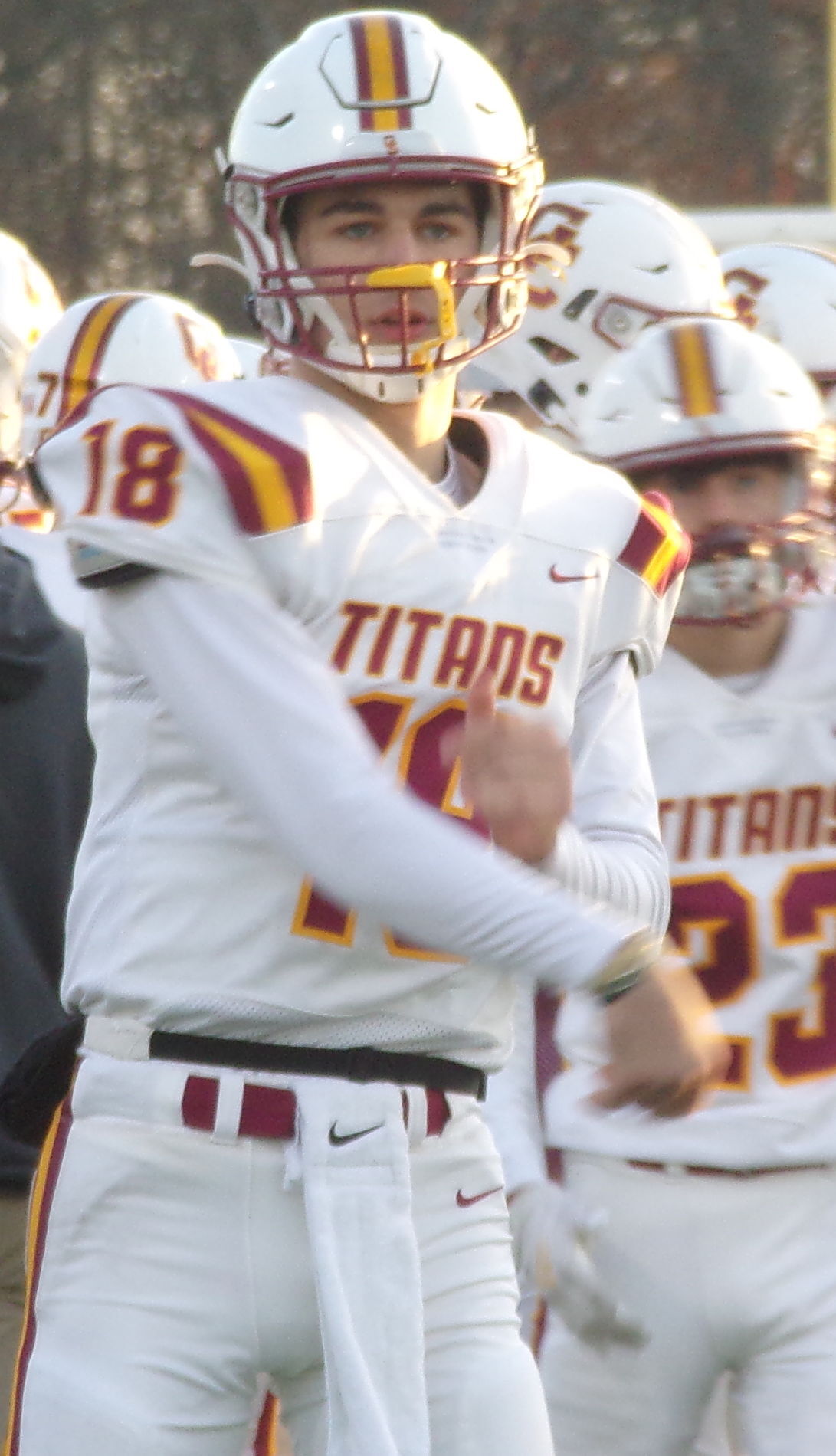 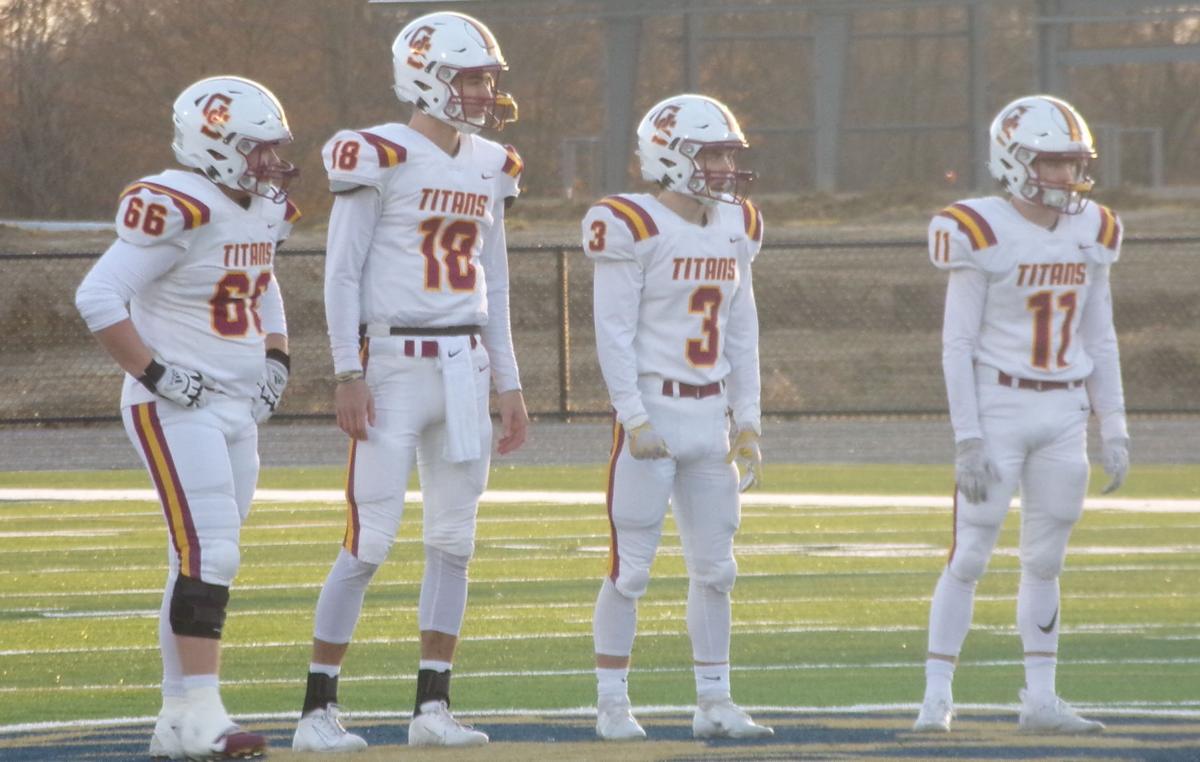 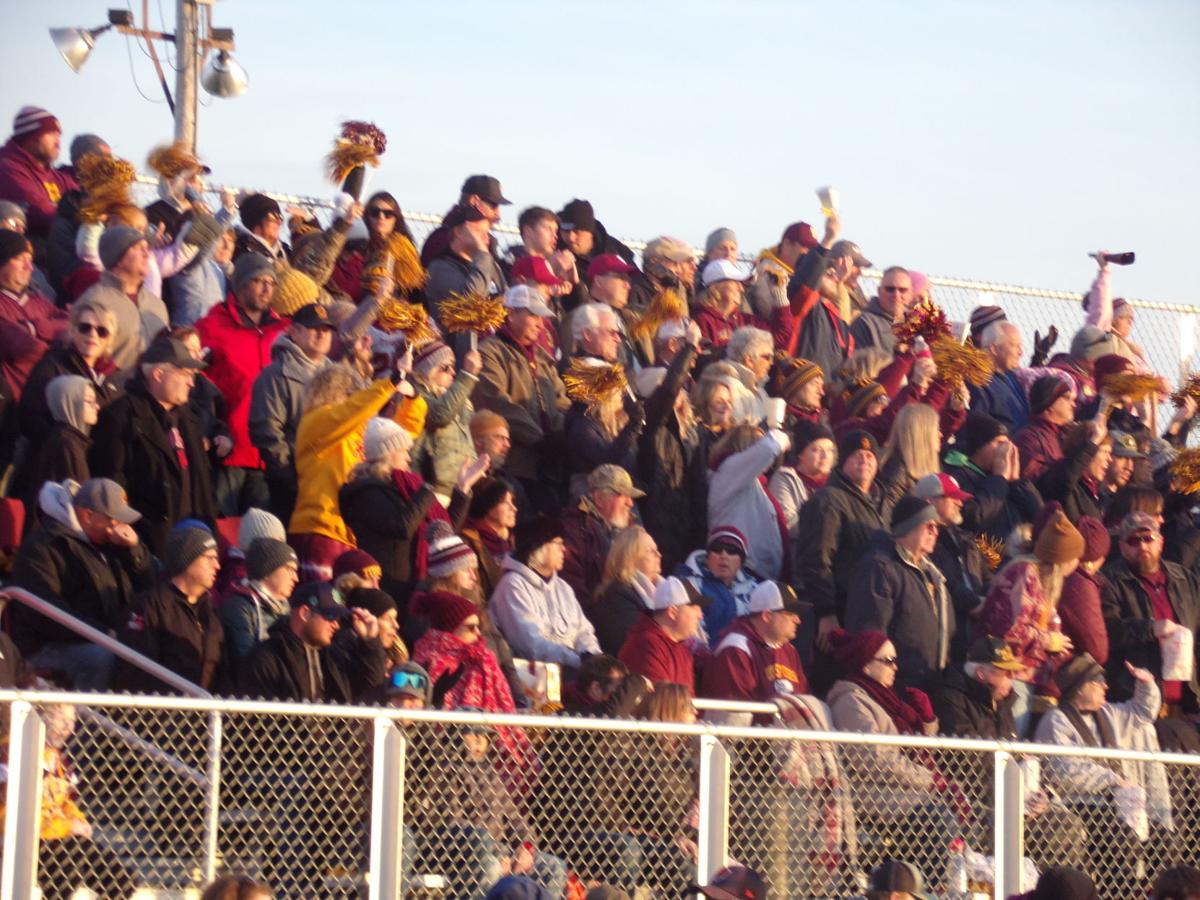 A sea of Maroon and Gold flooded Lizton Saturday to cheer on the Titans in their 44-7 Semi-State championship win over Tri-West Hendricks. 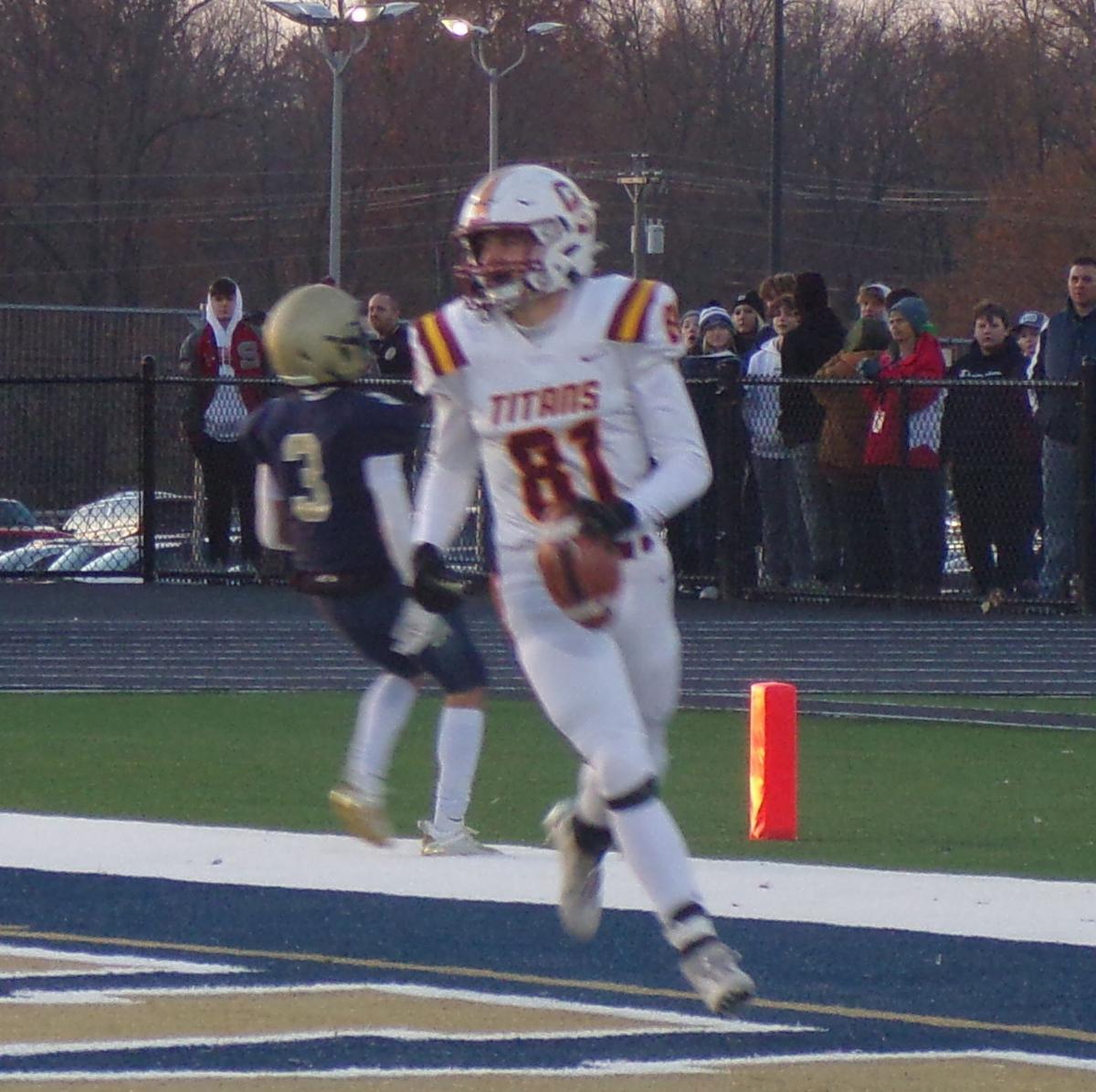 Gibson Southern senior Kaden Hurless celebrates in the end zone after sccoring a 67-yard touchdown in the first quarter of Saturday's Semi-State championship. 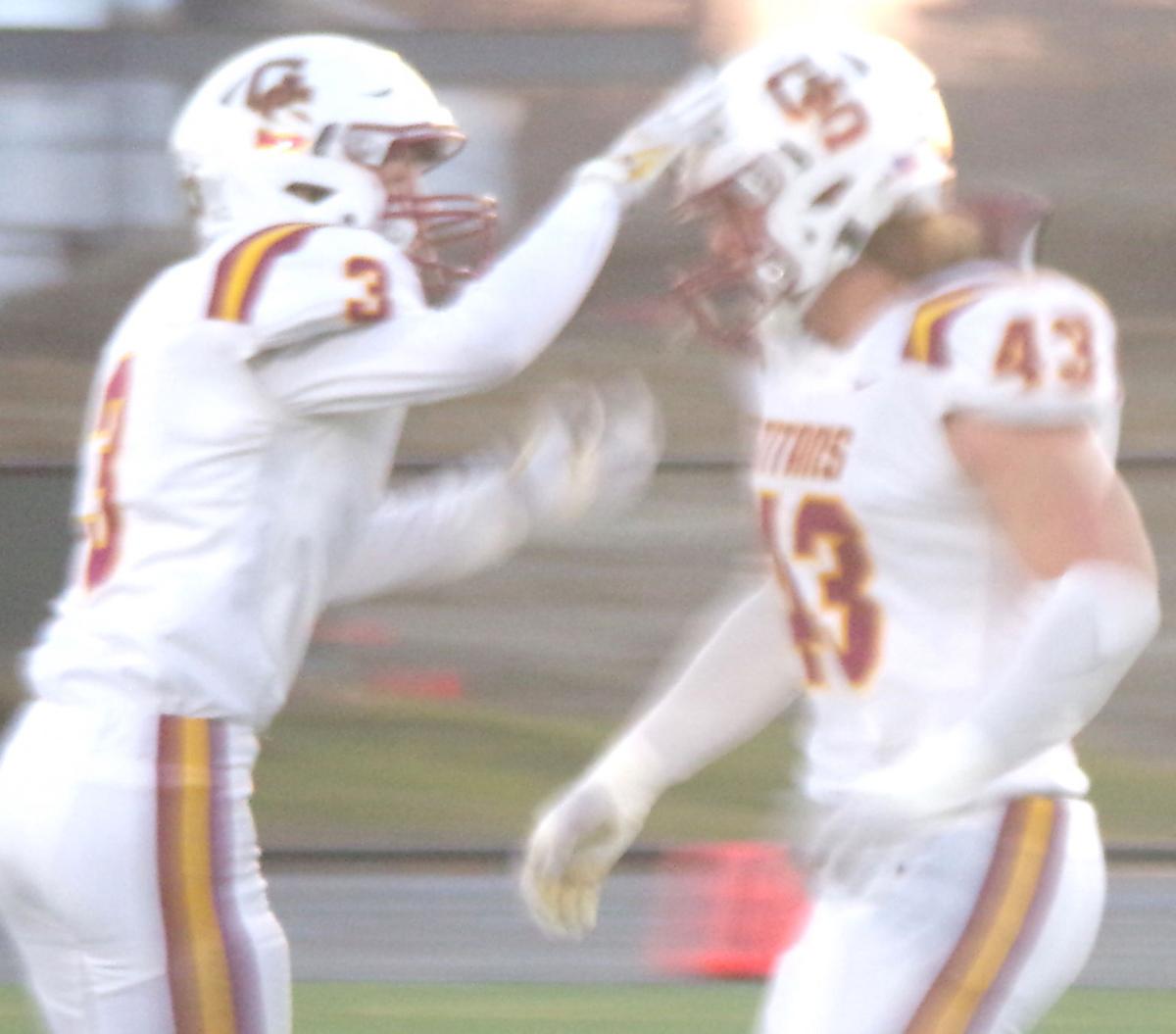 celebrate a fourth-down stop in the first quarter of their 44-7 win over Tri-West.

a 67-yard touchdown in the first quarter of Saturday’s Semi-State championship. 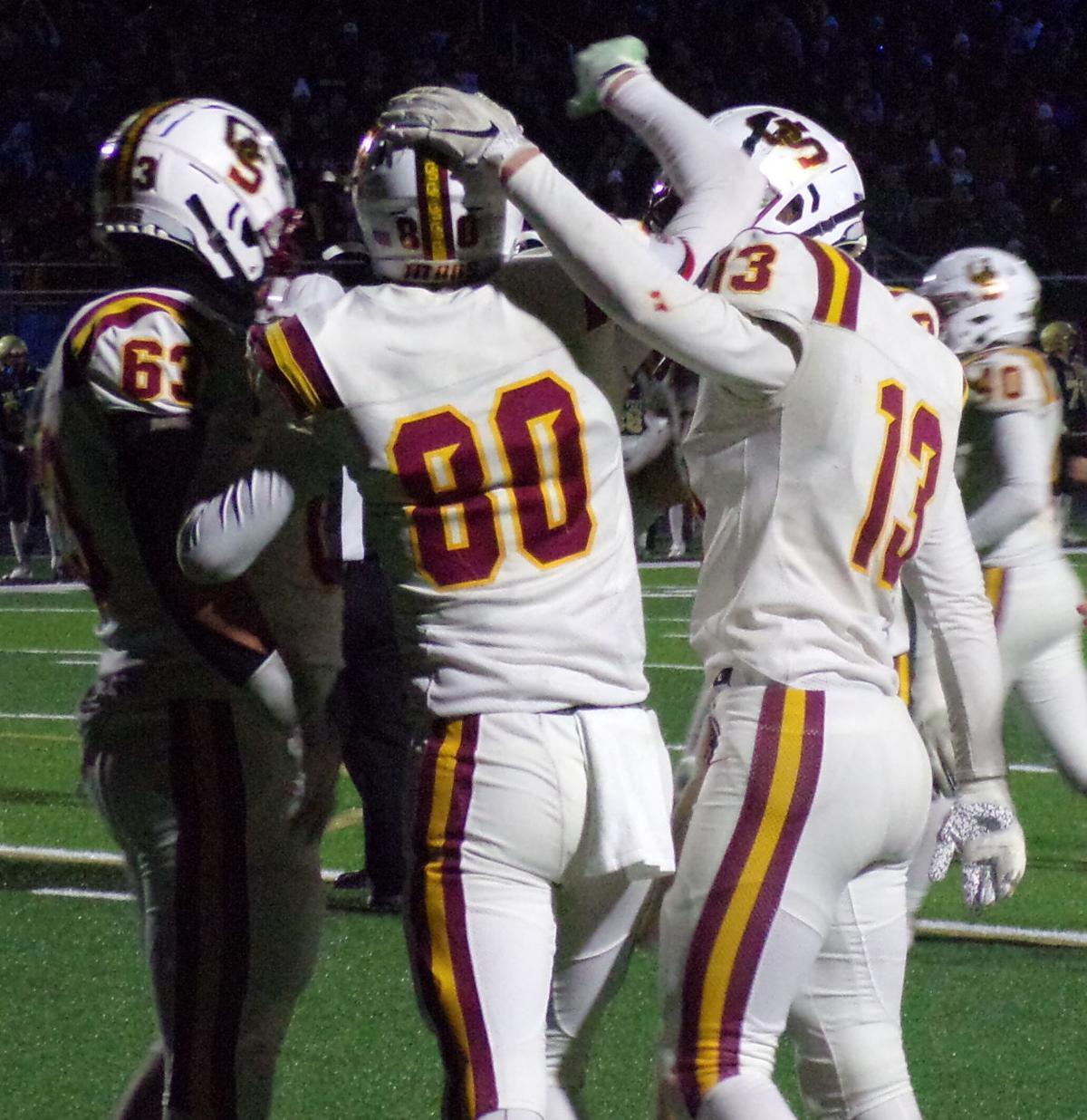 Cade Virgin (63) and Adrean Lukeman (13) congratulate Rory Heltsley after Heltsley made a three-yard touchdown catch in the third quarter of the Titans’ 44-7 Semi-State championship win in Lizton. 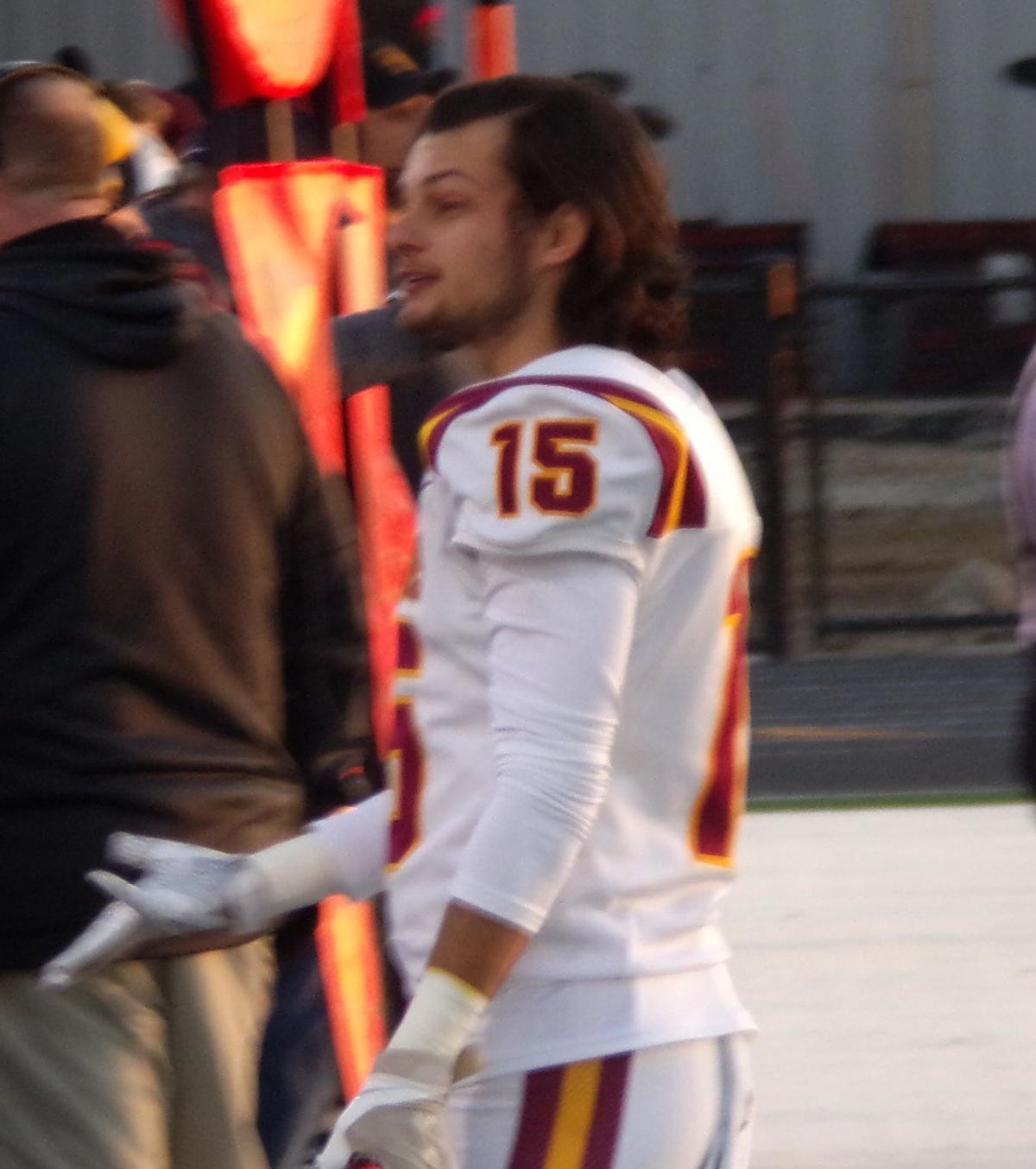 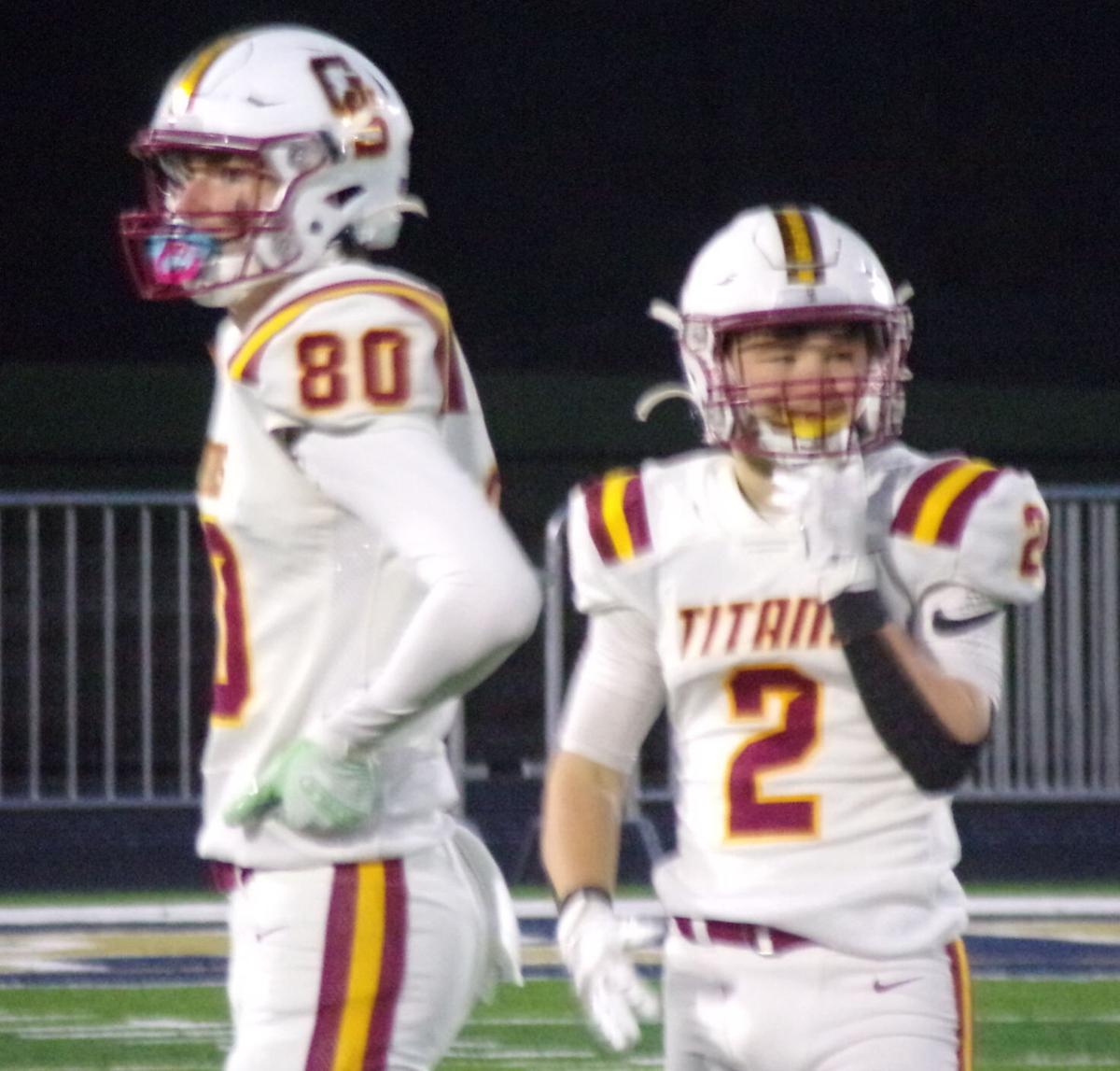 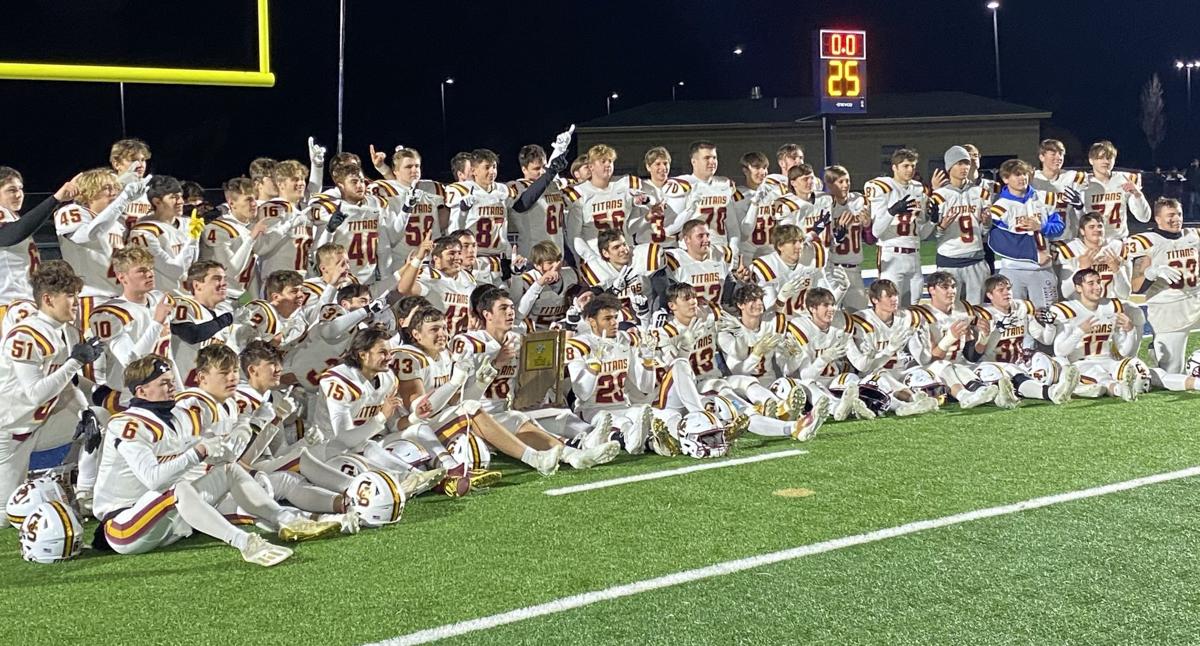 The 2021 Gibson Southern Titans celebrate after winning the Class 3A semi-state 8 title at Tri-West Hendricks.

A sea of Maroon and Gold flooded Lizton Saturday to cheer on the Titans in their 44-7 Semi-State championship win over Tri-West Hendricks.

Gibson Southern senior Kaden Hurless celebrates in the end zone after sccoring a 67-yard touchdown in the first quarter of Saturday's Semi-State championship.

celebrate a fourth-down stop in the first quarter of their 44-7 win over Tri-West.

a 67-yard touchdown in the first quarter of Saturday’s Semi-State championship.

Cade Virgin (63) and Adrean Lukeman (13) congratulate Rory Heltsley after Heltsley made a three-yard touchdown catch in the third quarter of the Titans’ 44-7 Semi-State championship win in Lizton.

The 2021 Gibson Southern Titans celebrate after winning the Class 3A semi-state 8 title at Tri-West Hendricks.

In their fourth trip to Semi-State in program history, the Gibson Southern Titans football team is finally heading to Lucas Oil Stadium. Saturday, they defeated the Tri-West Hendricks Bruins 44-7 in the IHSAA Class 3A Semi-State 8 on the road at Litzon's Hendricks Regional Health Field to punch their tickets to downtown Indianapolis for next Friday's state title game.

"It means a lot," head coach Nick Hart who in his 10th year as Titans head coach, will be taking his team to the state championship game, said postgame. "We've been close, we've been to semi-states, we've lost tough sectional games to teams that have gotten there.

"We've been knocking on that door and to finally get through is unbelievable."

The Titans started Saturday's semi-state game on offense where on their third play from scrimmage, senior Purdue-bound quarterback Brady Allen was flushed out of the pocket and threw up a prayer that was answered when senior wide receiver Rory Heltsley tracked the ball to make a diving catch to move Gibson Southern to the Bruins 36-yard-line.

"It was just a scramble," Hetlsey explained postgame. "I was running across the field and trying to follow him (Allen), so he had someone to throw to and I think making that catch especially early in the game really gave us a momentum boost for that first drive and into the second drive too.

"Throughout the game, it comes back to the big plays like that resulted in a big win."

On the next play, Allen hit Heltsley for a 25-yard game which set down a first down play from the Bruins 11-yard-line where Allen connected with senior wide receiver Brayden Malone for an 11-yard touchdown.

After Gibson Southern's defense forced a three and out on the Bruins' first possession of the game, the Titans' offense picked up right where they left off. On the first play of their next drive, Allen hit a wide-open Kaden Hurless, who had nothing but green grass in front of him, leading to a quick 67-yard touchdown strike to put the Titans on top 14-0 less than three minutes into the game.

Looking to answer, the Bruins drove down to their own 47-yard-line where on fourth and one, head coach Jason Ward elected to roll the dice and go for it. The decision would not pay off as running back Davon Brown was stopped for a three-yard loss by Titans linebacker Levi Dickerson turning the ball over on downs.

Despite a short field, the Titans were held out of the end zone on their next drive as on third down and four from the Bruins five, Allen threw incomplete, which led to the Titans settling for a Chris Spear 22-yard-field goal and a 17-0 lead.

Looking to chip into the Titans lead, the Bruins' offense pieced together a drive that began at their own 28-yard-line and led all the way to the Titans' 26-yard-line, where they faced a fourth and four.

Going for it again, the Titans' defense again clamped down as they forced an incomplete Ty Owens pass to again turn the Bruins over on downs.

With 2:22 left in the opening quarter and on the second play of their next drive, the Titans offense made one of their lone mistakes of the night as Allen threw just his third interception of the season to Bruins sophomore linebacker Coen Smith giving the ball back to Tri-West at the Gibson Southern 32-yard-line.

After a two-yard run by Brown on first down, the Bruins cashed in on the Allen turnover as Owens hit sophomore Landen Ross for a 30-yard touchdown to cut the Titans lead down to 17-7.

The 17-7 score would hold until the final two minutes of the second quarter as after both teams turned the ball over on downs after long drives, the Titans regained possession and moved the ball to the Bruins 10-yard-line where on third down, Allen fired incomplete leading to a 27-yard Spear field goal with 1:52 left in the half to make it 20-7 Gibson Southern.

After the Titans defense forced a quick three and out on the next Bruins possession, their offense was able to drive down for three more points before the half as Spear knocked down a 26-yard field goal with 11 seconds left in the half to push the Gibson Southern lead to 23-7.

In the final seconds of the half, Titans senior linebacker Adrean Lukeman was able to intercept Owens to give Allen a chance for a hail mary with one second left in the half, but Allen's pass would fall incomplete as Gibson Southern took a 16-point lead into halftime.

Opening the second half with the ball, the Bruins drove down to the Titans' 40-yard line where on fourth and 10, they elected to go for it. Again, Gibson Southern's defense stepped up as Tri-West's Jeff Marsh fumbled a pitch that was recovered by Titans senior Cade Virgin at the Tri-West 47-yard-line, giving the ball back to Gibson Southern.

The Titans' offense would not waste much time cashing the turnover in for points as they drove down to the Bruins three-yard-line where on second and goal, Allen hit Heltsley for a touchdown extending the lead to 30-7.

Desperately needing points, the Bruins offense sparked by a pair of 13-yard Owens completions drove down to the Titans 28-yard line where on third and three, Brown coughed up the ball and Gibson Southern senior Ben Luttrell jumped on it to give the Titans defense their third turnover of the night.

The turnover again would prove costly for the Bruins as on the first play of their ensuing possession, sophomore running back Sean DeLong broke free for a 52-yard run to the Bruins 20-yard line and six plays later on fourth and goal from the one, Allen sneaked in a score to push the lead to 37-7.

Tri-West would start their next drive at the Titans 48-yard-line after Gibson Southern senior defensive back Noah Bryant was called for a personal foul for a late hit out of bounds on the kickoff return.

Despite committing the penalty on the previous play, Bryant turned on the game clock for the rest of the night as on first down, he picked off Owens and ran it back for a 52-yard interception return touchdown pushing the lead to 44-7 and forcing the 35-point running clock mercy rule into effect.

"You've just got to keep playing," Bryant said on his pick-six coming immediately after a late hit out of bounds. "I knew the score was 37-7 at that point and you've got to just keep playing and get the win."

In the fourth, the Titans rested their starters but kept the Bruins off the scoreboard as they finished a dominant 37 point win to punch their tickets to downtown Indy.

Allen threw for 385 yards for the Titans with three touchdowns. His touchdown pass to Hurless gave him the unofficial IHSAA record for career passing touchdowns.

"It's very fitting," Hart said of Allen leading the Titans to the state title game in his final high school season. "He's been doing everything he can to get there and so he definitely deserves it."

Despite generating plenty of attention as he does each week from the opposing secondary, Heltsley made a team-high 15 catches for 219 yards and a touchdown.

"In my opinion, it's very respectful. I think I get a lot of respect in that sense, Heltsely said of the extra attention he receives. "Watching film is very key, knowing I'm going to have a couple of people guarding me every game. I've got to make sure I keep playing my game and don't try to do anything too big."

In total, the Titans offense collected 486 total yards while scoring 37 of their teams 44 points against a Tri-West defense that entered Saturday's game, having allowed an average of just 12 points per game.

"Early they were playing some cover-2 and we got into some of our cover-2 beating stuff," Hart said. "It comes down to guys making plays, it wasn't much of a secret. They were going to run some cover-2 stuff and we got good protection upfront and our guys made some good plays on the receiving end."

"We're bonded together, Bryant said of his defense. "We love playing football, playing and being on the field together.

"We fly around, make plays and try to keep that number on the scoreboard as low as possible.

The win gives a Titans team consisting of over 20 seniors with many that have played football together throughout their entire childhood, their first-ever trip to Lucas Oil Stadium.

"We've been playing our ass off all year," Bryant, a member of that senior class, said. "We've done this since fourth grade playing for this one game and it's just special to get here. We've been waiting for this for a long time."

"It's great, for our program and our first football semi-state championship we've ever won," Heltsley, also a senior, added. "This team, we've wanted it for so long. We came in with a great senior class and a great team that's really worked hard this season and to get this means everything."

The Titans will battle the 12-2 Brebeuf Jesuit Preparatory Braves in the Class 3A title game in downtown Indianapolis. Kickoff is slated for next Friday, November 26, at 2:30 p.m. CST and 3:30 p.m. EST.

As transfer portal frenzy nears lull, where do the Huskers still need 'difference-makers?'